‘It’s Dangerous to Write the Truth.’ Journalists Fear the End of Press Freedom in Myanmar

The arrest and prosecution of two Reuters journalists in Myanmar has cast a pall over media workers in the country, with veteran reporters and editors conveying fears that any journalist could be the next victim of intolerant authorities and colonial-era laws.

Reporters have expressed frustration with Nobel laureate Aung San Suu Kyi’s civilian government, which has proven itself firmly in alignment with the country’s powerful military to repress critical coverage. International media organizations operating in Myanmar have begun publishing stories without bylines to protect their local reporters, who have faced escalating intimidation, harassment, and death threats from the public and the authorities. Some outlets have even temporarily shifted personnel out of Myanmar.

“They arrested us and took action against us because we were trying to reveal the truth,” Wa Lone told journalists following their second hearing earlier this month. Than Zaw Aung, the reporters’ lawyer, told TIME that they would be pleading not guilty at their next hearing on Jan. 23. “They worked according to media [ethics] rules. They didn’t break the law,” he says.

Wa Lone and Kyaw Soe Oo were thought to be investigating the military’s campaign of violence in Rakhine state, which forced more than 655,000 members of the Muslim Rohingya minority to flee into Bangladesh, many bearing accounts of extrajudicial killings, gang rape, and torture.

The reporters were invited to meet two police officers last month on the outskirts of Myanmar’s biggest city Yangon. There, they were handed documents and almost immediately arrested, according to Reuters. The Ministry of Information, quoting police, said they were detained for “illegally obtaining and possessing … important and secret government documents.” A senior official for the ruling National League for Democracy suggested they were framed.

“The criminal indictment of the two Reuters reporters is a clear escalation of the government’s growing use of legal harassment to intimidate and jail journalists,” the Committee to Protect Journalist’s Southeast Asia representative Shawn Crispin tells TIME, adding that “[Aung San] Suu Kyi’s government is clearly in damage control mode,” as evidence of crimes perpetrated against the Rohingya accumulate.

Last week, the military admitted that its soldiers were responsible for the murder of 10 Rohingya men, whose bodies were found in a mass grave. U.N. High Commissioner for Human Rights Zeid Ra’ad Al Hussein has said the operations in Rakhine, which the military contends are a legitimate counter-insurgency, constitutes “textbook ethnic cleansing” and contains “elements of genocide.”

For local journalists, reporting on such sensitive issues is fraught with insecurity. The country’s first civilian government in 50 years has shown itself just as willing as its military predecessors to pursue punitive charges against journalists investigating conflict or corruption. Reporters Without Borders ranked Myanmar 131 out of 180 countries in its 2017 World Press Freedom Index.

“We can’t be satisfied as journalists even under the government we voted for. It is still dangerous to criticize someone or write what we know is the truth,” says Aung Naing Soe, a journalist and photographer who was recently detained for two months with a team from Turkish broadcaster TRT. The team, which included a Malaysian and Singaporean journalist and their driver, was mostly kept in solitary confinement, he told TIME.

The Ministry of Information (MOI) has actively cultivated discord between foreign and domestic media, discrediting international coverage of the Rohingya crisis as biased and potentially detrimental to the country’s political transition while dismissing credible reports of atrocities as “fake news” and “fake rape.”

At least 32 journalists have been charged in Myanmar while in the line of work since Suu Kyi’s government came to power, according to local group We Support Journalists. Of those, 18 were charged under the notoriously flexible defamation clause of the Telecommunications Law, which rights groups say is used to stifle criticism of authorities. Efforts to amend it last year fell short of protecting defendants from being jailed over social media posts.

“The vague wording of many laws in Myanmar … makes it extremely difficult for a journalist or editor to protect themselves from potential legal action,” Tom Kean, Editor-in-Chief of independent weekly magazine Frontier Myanmar told TIME. “There is always a law at hand that can be applied if someone in power is threatened.”

Reporters and editors have little recourse. The Myanmar Press Council’s vice chair, Aung Hla Tun, is himself a former Reuters correspondent and an outspoken critic of international coverage of the Rohingya crisis, which he has called “sensational” and “unethical.” This week, he was appointed Deputy Minister of Information. Speaking in Naypyidaw, the country’s capital, in August, he singled out “safeguarding our national image” as Myanmar journalists’ top priority.

The government is sending the message to “attack the media, especially foreign media, be virulently racist, and you’ll be rewarded with a cabinet position,” says a Myanmar journalist who wishes to remain anonymous.

By targeting a premier news organization like Reuters, whose thorough and unflinching coverage of the Rohingya’s persecution earned a Pulitzer Prize in 2014 and an Honorable Mention from the Society of Publishers in Asia last year, “the government is sending a clear message that no journalist is safe to report on sensitive stories,” CPJ’s Crispin says. “It’s a sad turn for an elected government that many hoped would promote, not repress, media freedoms,” he adds.

Tha Lun Zaung Htet, co-founder of the Protection Committee for Myanmar Journalists, a collective of more than 100 media workers, says being a journalist in Myanmar “is becoming very dangerous.” Formed in 2012, the group has become something of a de facto industry front, organizing protests to repeal repressive legislation and free jailed colleagues. This month, they distributed black shirts to reporters attending the Reuters journalists’ hearing to “show the dark age of Myanmar’s press freedom.”

“The government does not understand the meaning of press freedom,” he says. “They treat journalists as enemies.” 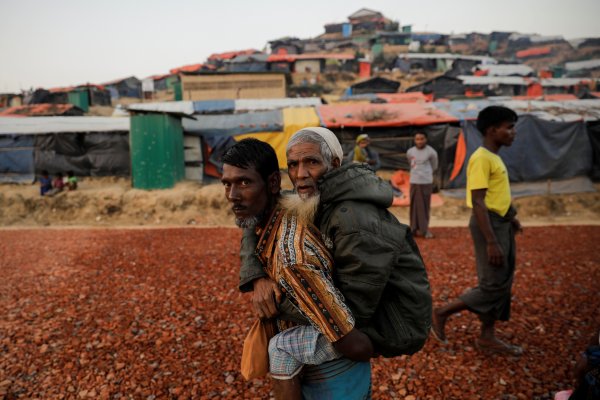 Myanmar and Bangladesh Plan to Return Rohingya Refugees
Next Up: Editor's Pick