'A New Low.' The World Is Furious at Trump for His Remark About 'Shithole Countries'

He may be a president already known for his crude language and off-color remarks demeaning other nations, but Donald Trump’s description of Haiti, El Salvador and some parts of Africa as “shithole countries” has sparked unprecedented international outrage.

Trump was meeting with lawmakers at the White House on Thursday to discuss a bipartisan immigration deal when he reportedly grew frustrated at the suggestion that immigrants with protected status would need that status restored.

“Why are we having all these people from shithole countries come here?” Trump said. On Friday morning, Trump seemed to deny using those specific words in a tweet.

Condemnation from around the world, including the countries named, followed swiftly after the initial report, and in some cases, in no less salty language than president’s own choice words.

Vicente Fox, Mexico’s former president and a long-time Trump troller, said that the president’s mouth was “the foulest shithole in the world.” He then reminded him that America’s “greatness” was built on diversity.

Some residents of Haiti fired back at Trump with pictures of the island’s radiant coastline.

CNN anchor Anderson Cooper said the president’s remark was, “not racial. Not racially charged” but “racist”.

“Let’s not kid ourselves,” he said. “The sentiment the president expressed today is a racist sentiment.”

Late Night host Seth Meyers reacted by walking off set in despair, while Chelsea Clinton Tweeted that some of the president’s towers and golf courses were probably built by citizens of the nations he had maligned.

In an interview on MSNBC, Rev. Al Sharpton blasted Trump as building a “whole presidency on race”.

“Do you have to spray paint the n-word in the Oval Office or have a hood in the Lincoln Bedroom to be a racist? If you advocate everything whites only … and at every opportunity you disparage people of color, you are dealing from a racist and bigoted point of view. And the danger is that he is now putting that into policy in America.”

The NAACP accused Trump of falling “deeper and deeper into the rabbit hole of racism and xenophobia” and called Thursday’s remarks a “low point” among the “continuous lowbrow, callous and unfiltered racism repeatedly espoused by President Trump.”

Members of the Republican party have also broken ranks to condemn the president’s comment.

Republican Rep. Mia Love of Utah, the first Haitian-American elected to Congress, called for the president to apologize after his “unkind, divisive, elitist” comment.

Tim Scott, the GOP’s only African-American senator said in a statement, “If these comments are the President’s words they are disappointing to say the least…Our strength lies in our diversity, including those who came here from Africa, the Caribbean and every other corner of the world.”

Former CIA Director John Brennan said Lady Liberty was “weeping” over Trump’s “atrocious” comment, and James Comey, the former director of the FBI fired by the president, responded with the inscription on the Statue of Liberty: 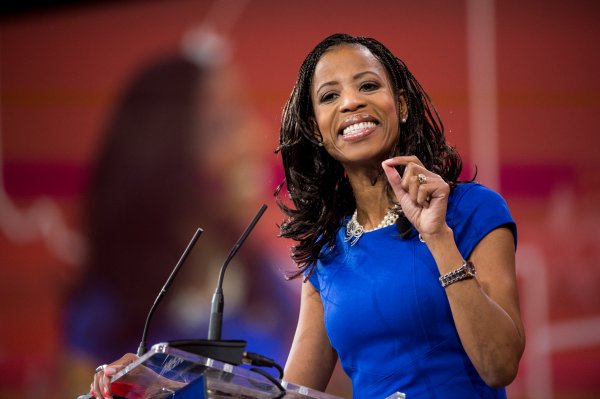