Each January, tech companies from around the world gather in Las Vegas to show off their latest efforts at CES, formerly called the Consumer Electronics Show, the biggest gadget show of the year.

While the products and demos showcased at CES don’t always reflect the technology you’ll be able to buy in the near future, the show does offer some insight into where tech giants are putting their time and resources.

This year was all about improving communication between smart home gadgets, making the car feel more personal, and putting screens everywhere imaginable.

Here’s a look at some of the coolest products we came across on the CES showroom floor.

L'Oreal's UV Sense is meant to be worn on the fingernail.
Lisa Eadicic

L’Oréal’s UV Sense is a tiny sensor capable of detecting ultraviolet exposure that’s small enough to wear comfortably on your fingernail. The sensor itself is battery-free and includes an NFC antenna, a temperature sensor, and a UV sensor.

That sensor, which can store up to three months worth of data, passes information to the accompanying app whenever the wearer holds the device close to his or her smartphone. The app keeps track of your exposure levels and can provide tips for managing sun intake.

While the UV Sense is designed to be worn on your nail, L’Oréal will also be releasing accessories so that users can wear it in different ways, too. The beauty company worked with designer and entrepreneur Yves Béhar on the product, in part why it resembles nail art rather than a piece of wearable technology.

However, there are three key advantages Lenovo’s Smart Display has over the Echo Show: It can play YouTube videos (unlike Amazon’s device), it includes a larger screen, and it has a more polished design that more easily blends into the home.

At CES 2018, Honda will unveil its new 3E (Empower, Experience, Empathy) Robotics Concept, demonstrating Hondas vision of a society where robotics and AI can assist people in a multitude of situations, from disaster recovery and recreation to learning from human interaction to become more helpful and empathetic. (PRNewsfoto/Honda)
Hand-out—Honda

Honda’s new concept robots may be just as cute as they are useful. At CES, the company showcased its 3E Robotics concept, which includes several robot companions all designed to serve different functions.

Robot 3E-A18 is Honda’s social empathy robot. The company says it’s meant to represent the idea that robots can support people by providing a sense of compassion and understanding. In a demo at CES, the roving robot’s glowing face frequently changed its expression as it greeted the crowd. Honda’s 3E-B18, comparatively, is a robotic chair concept, while 3E-C18 includes cargo space for transporting materials.

Samsung's The Wall TV was unveiled at CES 2018
Samsung

According to Samsung, TVs shouldn’t have to be just one size. That’s the idea behind its new 146-inch TV called The Wall, which the company is positioning as the first “modular TV.”

Samsung says users can alter the size and shape of The Wall so that it can function as a multipurpose display. In a demo on the showroom floor, the TV displayed what looked like a smaller TV in the center of the screen, while the surrounding area was set to blend in with the wall the TV was mounted on. And since the TV uses MicroLED technology, it should be able to produce even deeper black tones and potentially infinite contrast.

Read more: Your Future Smart Car Could Use AI to Help You Drive

Many smart robotic toys are designed with education in mind. But My Special Aflac Duck has a very different but nonetheless important job: The interactive toy, developed by research and development workshop Sproutel, was created to provide comfort to children diagnosed with cancer.

Children can mirror their care routines on the duck and can express their feelings through the toy by holding a circular token to its chest that prompts it to assume the corresponding emotion. Holding a token with a smiling happy face or a frowning angry face to the duck, for example, will enable it to react accordingly. This is meant to provide a sense of companionship to children as they undergo treatment and therapy. The duck is expected to be available for children diagnosed with cancer at no cost in late 2018 or early 2019. In early 2018, it will be shipping to children at the Aflac Cancer and Blood Disorders Center of Children’s Healthcare of Atlanta to undergo additional testing.

Lenovo’s long-running ThinkPad lineup is getting some worthwhile new additions at this year’s CES. Both new ThinkPad computers include a dazzling HDR display, a built-in physical webcam cover, and far-field microphones for speaking to Amazon’s Alexa and Microsoft’s Cortana. The two laptops also run on Intel’s newest eighth-generation processors.

The most impressive feature by far is the laptops’ HDR support, which makes colors look bold and vivid, arguably adding much more noticeable improvements than 4K resolution.

Considering Alexa has made its way into just about every Internet-connected product, it was only a matter of time before the digital butler arrived in smart glasses. The Vuzix Blade augmented reality glasses will support Alexa so that wearers can ask for things like the weather and directions. The Vuzix Blade’s display also sits more prominently in the wearer’s field of view than Google Glass and looks much more crisp and colorful. If developers create compelling apps that blend Alexa’s capabilities and augmented reality, the Blade AR glasses could have some promising potential.

Byton wants your car to feel more like your living room rather than a just a means of transportation. That’s the idea behind its concept car, which the company says will be launching in the U.S. in 2020.

The concept vehicle’s most striking characteristic is its gigantic screen, which stretches across the entire dashboard. The car will also include facial recognition so that it can identify the driver and load his or her settings as he or she enters the vehicle.

As smartphone screens have gotten larger, they’ve become our go-to entertainment devices. But there are still many times in which you may want to watch movies or TV shows on a much larger screen when a TV isn’t nearby. That’s where the Movi smartphone comes in: The $599 Android phone includes an integrated projector that can project 720p videos.

The Philips SmartSleep headset emits tonal frequencies to help you get the most out of your sleep.
Cwenar Studios

Philips’ headband isn’t designed to help you get more sleep. Rather, it’s meant to help you get the most out of your sleep. The headband emits a tone that the company says improves slow wave sleep, the stage in the sleep cycle at which brain waves and breathing slow to their lowest levels.

Citing studies, Philips says this type of sleep can help boost alertness and the ability to maintain focus. Two sensors on the headband detect when you fall asleep and can identify when you enter deep sleep. Then, an algorithm customizes the volume and level of the tone being emitted in a way that the company claims will boost slow wave activity in the brain. 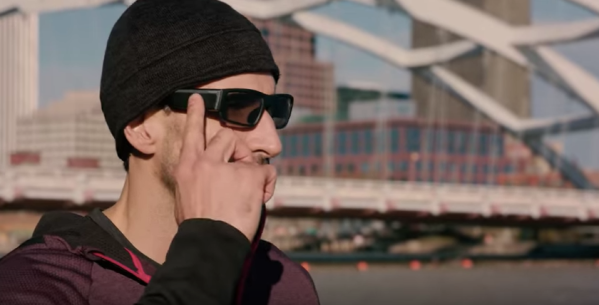 Amazon Alexa Could Make These Smart Glasses Way Better Than Google Glass
Next Up: Editor's Pick