President Donald Trump’s critics have long argued whether his tweets are a distraction from the more important policy decisions being made behind the scenes.

But some of Trump’s tweets as president have been just as consequential, if not more so.

In Trump’s first year in office, tweets from @realdonaldtrump have cut the cost of an Air Force contract, undermined White House messaging, forced federal agencies to rebuke them, stoked a congressional investigation, spurred the former director of the FBI to leak a damaging memo, possibly led to the appointment of a special counsel, created new legal trouble for the White House, announced a new military policy to the surprise of the Pentagon, upended a Republican plan to gut an ethics office, nearly derailed two bills the White House backed and been cited by multiple judges ruling against the Administration on several issues.

That seems entirely appropriate, as then-spokesman Sean Spicer said in June that Trump’s tweets are “considered official statements by the President of the United States.”

To be sure, not all of Trump’s tweets have consequences. Some do little more than spur a cable news segment or throw some red meat to his supporters. And others simply repeat the same arguments he’s making at White House events and campaign rallies. But the ones that have mattered have had real-world results.

Here’s a look at some of Trump’s most consequential tweets as president.

Shortly before taking office, Trump tweeted that Boeing’s projected cost for a new Air Force One was “out of control.” “Cancel order!” he wrote. Though not entirely accurate, the tweet sent chills through the defense industry, which feared the president-elect’s bully pulpit, and the U.S. Air Force eventually reduced the price by buying a pair of 747s abandoned by a bankrupt Russian airline.

As with Boeing, similar Trump tweets attacking Lockheed Martin, General Motors and Toyota led the companies’ stock prices to dip immediately, though most recovered after a while, but his criticism of Nordstrom actually led its stock value to climb. When the official White House @potus account retweeted the Nordstrom attack, ethics experts expressed concern, but no action was taken.

The White House repeatedly tried to avoid calling its executive orders restricting entry to the U.S. for citizens of some countries as “travel bans,” in order to avoid legal complications. “This is not a travel ban,” said then-Homeland Security Secretary John Kelly, according to Business Insider. “It’s not a travel ban,” added then-White House spokesman Sean Spicer. Then, early in the morning on June 5, Trump tweeted that it was a travel ban after all.

In a second tweet just minutes later, Trump undermined the White House messaging in a different way, calling the second version of the travel ban “watered down,” a remark which opened the door to judges comparing it to the first.

In March, Trump charged that President Barack Obama wiretapped Trump Tower before the 2016 election, calling him a “bad (or sick) guy.” The tweets prompted Obama to issue a rare rebuke of his successor, saying through a spokesman that the claim was “simply false.” The White House and the Republican chairman of a House intelligence committee sought to bolster the unsubstantiated allegation, and eventually the FBI and the Justice Department were forced to declare in court that they have no records of a wiretapping.

Frustrated by news accounts of his firing of former FBI director James Comey, Trump intimated in a May tweet that he may have recorded their conversations.

That led to weeks of speculation over a secret White House taping system, bringing up comparisons with President Richard Nixon. The House Intelligence Committee eventually set a deadline for the White House to clarify whether such tapes existed, and Trump revealed in two subsequent tweets that they did not.

The “tapes” tweet also led Comey to leak memos describing his interactions with Trump, as he explained later to the Senate intelligence committee.

“The President tweeted on Friday, after I got fired, that I better hope there’s not tapes,” Comey said. “I woke up in the middle of the night on Monday night, because it didn’t dawn on me originally, that there might be corroboration for our conversation, there might be a tape.”

Comey’s leak led directly to a story in the New York Times on May 16 recounting that Trump asked him to end the investigation into former National Security Advisor Michael Flynn, who later pleaded guilty to misleading federal agents.

As Comey told the Senate committee, he hoped the leak of his memo would prompt the appointment of a special counsel to look into various legal issues raised by his firing and the Russia investigation.

It’s hard to definitively say whether that happened, because Deputy Attorney General Rod Rosenstein made the decision on his own, but former FBI director Robert Mueller was appointed special counsel on May 17, the day after the Times story on the memo ran.

Michael Flynn and the FBI

After Michael Flynn pleaded guilty in December, Trump tweeted that he had to fire him because he had “lied to the FBI.” That prompted Trump critics to question whether the president knew that Flynn had lied, with some even speculating that it amounted to an admission of obstruction of justice.

That led Trump’s personal lawyer, John Dowd, to step forward to say that he drafted the tweet, which only raised more questions.

In July, Trump took to Twitter to announce that he would not allow transgender individuals to serve in the military, ending years of high-level discussion on the issue.

Top military leaders from all four service branches were reportedly blindsided by the tweets, and members of the Joint Chiefs of Staff, including Chairman Gen. Joseph Dunford, were not aware of the decision ahead of time, according to CNN.

Pentagon leaders said the next day that they would not change the policy until they received detailed guidance from the White House on how to implement the tweeted policy change.

In October, a U.S. District Court judge issued a preliminary injunction on the ban and transgender recruits were allowed to enlist starting Jan. 1.

A few weeks before taking office in January of 2017, Trump tweeted that Congress should not curtail the Office of Congressional Ethics, just one day after House Republicans had voted to do so. The ensuing uproar led GOP lawmakers to scrap the plan within a day.

In January of 2018, Trump took to Twitter to criticize the renewal of the Foreign Intelligence Surveillance Act, again citing his unfounded concerns that he was wiretapped by the Obama Administration. There was just one problem: The White House was pushing for the bill.

The tweet, which may have been based on a Fox New segment, briefly threw a vote on the bill into chaos, with some in Congress calling for a delay on the bill until the White House position could be clarified. In the end, the vote was held and the bill passed after Trump tweeted a clarification.

That happened again later in the month when Trump tweeted that a renewal of the Children’s Health Insurance Program should be part of a “long term solution,” seemingly contradicting the strategy behind Republicans’ continuing resolution, which included long-term funding for the program in an attempt to woo Democratic support.

The travel ban faced repeated court challenges over its constitutionality, especially because Trump had called on the campaign trail for a ban on Muslims entering the United States, a move that most judges would find violates religious freedom protections.

In a decision blocking the first travel ban, U.S. District Court Judge Derrick Watson cited one of Trump’s tweets about “bad dudes,” saying it should be taken as an official statement by the president.

George Conway, husband of Trump adviser Kellyanne and a one-time candidate for a legal post in the White House, warned that the president’s tweets could come back to haunt him if the case ever went before the Supreme Court.

Conway was right. The 9th Circuit Court of Appeals cited one of Trump’s tweets in a ruling against the second version of the travel ban.

In October, U.S. District Court Judge Theodore D. Chuang also cited Trump’s tweets when ruling against the third version of the travel ban, including the “watered down” tweet, another which cited a fake story about General John J. Pershing and another that mentioned political correctness.

During questioning on a case involving the third version of the travel ban in a federal court in December, members of the U.S. Court of Appeals for the 4th Circuit also voiced concern about some of Trump’s tweets, including the Pershing tweet and another instance in which Trump retweeted videos about purported Muslim violence from a far right British group.

It’s not just the travel ban either. In October, U.S. District Court Judge Colleen Kollar Kotelly cited Trump’s tweets announcing a ban on transgender individuals from serving in the military in a decision granting a temporary injunction against it.

And in January of 2018, U.S. District Court Judge William Alsup cited Trump’s tweets about the Deferred Action for Childhood Arrivals program in a decision blocking the Administration from phasing it out. 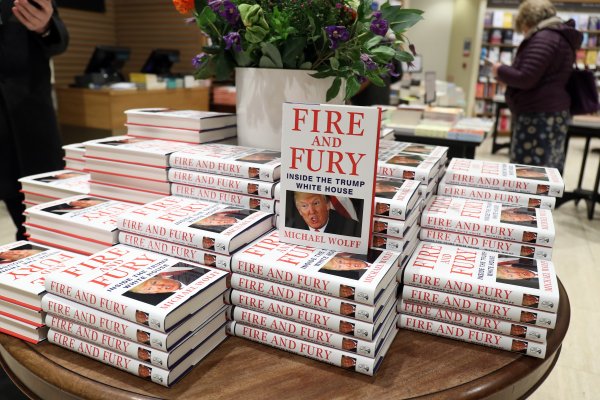 Fire and Fury Headed For Screen Adaptation
Next Up: Editor's Pick