'We Don't Share a Common Baseline of Facts.' Barack Obama Reflects on Divisiveness in Politics

In a wide-ranging interview with David Letterman, former President Barack Obama reflected on his first year out of office, offering his thoughts about everything from about the current state of the country to his daughter’s sense of humor.

The interview, on Letterman’s new Netflix show My Guest Needs No Introduction was Obama’s first talk show appearance since he left the White House.

Obama never mentioned President Donald Trump by name — or any of his policies, many of which have been aimed at rolling back Obama’s legislative agenda. But he and Letterman did discuss the implications of of Russia’s alleged attempts to intervene in the 2016 presidential election and the divisiveness in the country that Obama said is pervasive, and exacerbated by social media.

“One of the biggest challenges we have to our democracy is the degree to which we don’t share a common baseline of facts,” Obama said. “What the Russians exploited, but it was already here, is we are operating in completely different information universes. If you watch Fox News, you are living on a different planet than you are if you listen to NPR.”

“At a certain point,” he continued, “You just live in a bubble and I think that’s why our politics are so polarized right now.”

The episode also featured an interview between Letterman and Congressman John Lewis as they walked across the bridge in Selma, Alabama where Lewis was beaten during the march from Montgomery in 1965. Lewis was explicit about his disapproval of the Trump administration, calling it “a threat to the planet.”

Obama reiterated Lewis’ influence on him and hailed him as a key reason America has improved — and the type of people he wants to mold through his new foundation.”Every once in a while you’ll find in every period in our history…these extraordinary folks like a John Lewis, who against all odds change history,” he explained. “There are so many young people who want to get involved but don’t know how.

While Obama lamented the fact that things move slower in the world outside the White House, he said that overall, he does not necessarily miss the daily life of a President. When asked about waking up on his first day out of office, Obama quipped,”it was later — I slept in, which I was pretty happy about.” 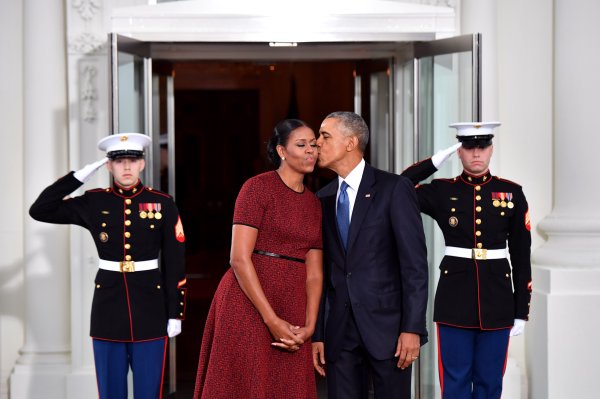 'We Wish You Joy and Peace.' See the Obamas' Festive Holiday Photo
Next Up: Editor's Pick