This Is What Actually Happens In a Government Shutdown

A closure sign is posted on the national mall near the US Capitol in Washington, D.C.
Jewel Samad—AFP/Getty Images
By Laurence Arnold / Bloomberg

Talk about a U.S. government shutdown is intensifying. Without agreement on the 12 appropriations bills that guide annual spending, the U.S. has been operating since Oct. 1 on temporary funding provided by a “continuing resolution.” Funding was due to run out after Dec. 8 but has twice been extended, most recently through Jan. 19. Republicans and Democrats in the U.S. Congress may need to keep passing short-term extensions until they reach accord on a trillion-dollar spending plan for the rest of the fiscal year. If the deal-making breaks down, the U.S. will encounter what’s officially called a “spending gap,” which triggers a carefully prescribed, but still disruptive, halt to Washington’s work.

1. What happens if the government shuts down?

Many, though not all, federal government functions are frozen, and many, though not all, federal employees are furloughed. Agencies in the executive branch, the one with the largest workforce and budget, regularly review shutdown plans that spell out what work must continue, and how many employees will be retained, during a “short” lapse (one to five days) and one that lasts longer.

The ones that draw headlines are closures of national parks, monuments and the Smithsonian museums in Washington. Other activities that generally stop, at least if the shutdown lasts more than a couple days, are processing of applications for passports and visas; new enrollments in experimental treatments under the National Institutes for Health; and the maintenance of U.S. government websites, including ones used by businesses and researchers. Mortgage approvals can be delayed by furloughs at the Internal Revenue Service and the Federal Housing Administration. The last shutdown, which lasted 16 days in 2013, delayed approval of about 200 drilling applications at the Bureau of Land Management, consideration of 700 applications for small business loans totaling $140 million, and the start of the Alaska crab season, which relies on harvest levels apportioned by the National Oceanic and Atmospheric Administration, according to a 2013 report by the White House Office of Management and Budget.

Activities related to national security (like the military services), safety and order (air traffic control, law enforcement) and medical care (veterans’ hospitals) are among the essential activities that carry on. So does the U.S. mail, since the Postal Service has its own funding stream. U.S. Treasury debt auctions continue, Social Security and Medicare checks get mailed, food stamps are distributed. Federal courts are open but their work is subject to disruption.

4. How many federal employees stay home?

In the 2013 shutdown, the number of executive-branch employees who were furloughed on a given day peaked at 850,000, or about 40 percent of the workforce.

5. Do federal employees get paid?

Eventually. When a shutdown happens, most federal employees — there are about 2.8 million of them now — are placed on unpaid furlough. Though there “appears to be no guarantee” that they will eventually be paid, in practice they always have been, retroactively, via legislation passed by Congress, according to the Congressional Research Service.

6. How often does this happen?

There have been 12 shutdowns since 1981, ranging in duration from a single day to 21 days, according to the Congressional Research Service. The 21-day one, in December 1995 and January 1996, was a famous budget showdown that pitted President Bill Clinton, a Democrat, and the Republican House speaker, Newt Gingrich. Shutdowns over budget disagreements are different (and less grave) than what would happen if the U.S. breached its debt ceiling and defaulted on some of its obligations. That’s never happened — though its specter, too, will grow if Congress doesn’t reach a budget deal in the next several weeks.

Until then, “funding gaps” didn’t result in shutdowns; agencies operated mostly as normal, and their expenses were covered retroactively once a deal was reached. Benjamin Civiletti, attorney general under President Jimmy Carter, put an end to that. With legal opinions issued in 1980 and 1981, he established that government work generally must cease until Congress agrees to pay for it. His rulings were codified in the Antideficiency Act, which, in theory at least, authorizes fines or prison terms to federal employees who dare work for free during a shutdown.

Leaders in Congress are juggling demands from factions in both parties to tie agreement on a spending plan to resolution of a variety of other measures. Those include raising budget caps for defense and domestic spending, funding the Mexico border wall promised by President Donald Trump, and extending the Deferred Action for Childhood Arrivals, a program to protect from deportation some 800,000 young people brought to the U.S. illegally as children. 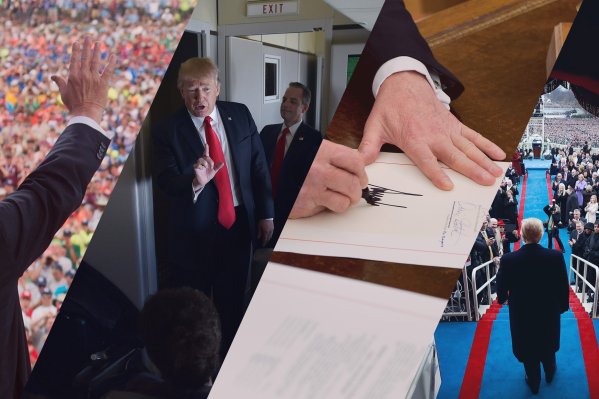 The Most Memorable Moments From Trump's First Year in Office
Next Up: Editor's Pick