Cindy Crawford’s list of career highlights is miles long, but one of the supermodel’s top memories is filming her iconic 1992 Pepsi commercial.

“This time of year it always gets featured in the roundups of the Best Super Bowl Commercials ever, and every January I revisit my original Pepsi spot that I just love because the music was perfect and the little boys were perfect and it was just one of those commercials that everyone loved and it made people happy,” she tells PEOPLE.

That sense of family and love is why Crawford is reuniting with the brand once again for the new “This Is The Pepsi” Super Bowl LII spot, which is part of the brand’s 2018 “Pepsi Generations” campaign celebrating all of its pop culture highlights through the decades (from Michael Jackson to Britney Spears!) while featuring its top drinks: Pepsi, Diet Pepsi and Pepsi Zero Sugar.

“This spot is a reminder of how much fun Pepsi has created for every generation,” Crawford shares. “It’s a look back at getting people excited for Pepsi now and the future. They’ve spent a long time creating all of these memorable moments and that’s exciting for me to because I really do consider myself part of the Pepsi family.”

For Crawford, this commercial (catch a 6-second teaser above!) was extra meaningful because it also brought together the generations in her own family. Her 18-year-old son Presley Gerber stars alongside her in the spot.

“To include now my next generation, Presley, just makes it that much more familial feeling,” she says. “I hope it gives people that warm, fuzzy feeling.”

Crawford says to work with Presley at this point in his career was “exciting.”

“We drove to work together, we shared a trailer, and just as a mom watching him perform, I was the proud stage mom standing by the monitor,” she says.

And Crawford’s 16-year-old daughter Kaia Gerber had a little FOMO when she heard about the commercial.

“I was saying to Kaia, ‘Presley and I are doing this commercial’ and she was like, ‘Wait Presley and you? What about me?,’” Crawford shared. “I said, ‘Your time will come honey don’t worry.’ I think it would be fun for her to get to really re-create my original spot.”

Speaking about her debut Pepsi commercial, Crawford reveals that she still has those iconic denim cut-offs.

“They were my jeans that I wore that day and when we were doing wardrobe the stylist asked to just cut my jeans off,” she says. “Because your own jeans always fit you better if you’ve worn them awhile so we just cut off my jeans and I got to keep my own jeans.”

Crawford wore the same cutoffs for the spot 10 years later, which had a cameo from her very young children.

“My kids were little so this actually Presley’s second Pepsi commercial,” she says. “The car in that one is not a Lamborghini, it’s an SUV, and I’ve got my two little kids in the back so they have been part of the Pepsi family really since they were little.”

But this time her look was totally different: a denim shirt, white jeans and boots.

“I don’t know if the shorts would still fit but this time we didn’t want to bring them back because the commercial is about passing onto the next generation, it was a nod to the old commercial without wearing the exact same outfit,” Crawford says. “Time has gone on and I have an 18-year-old son now. I think Kaia will wear them one day.”

So what is Super Bowl Sunday like at the Gerber household?

“It involves chili and some wings and Pepsi of course, and probably at a certain point, margaritas,” Crawford shares. “It’s about the tradition of getting together. Some years I watch less of the football, but I always look forward to the commercials and the halftime show. I think we are all in our busy current lifestyles, and we appreciate those things that bring people together. If you think about it that’s why award shows are fun too because you have a group of people sitting around together doing a shared experience — it’s social. And for me I love the social moment of the Super Bowl.” 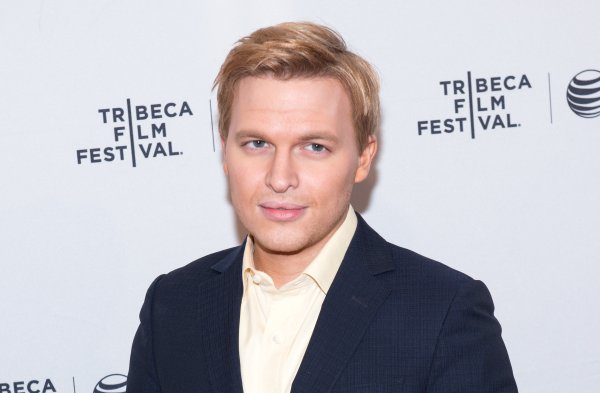 Ronan Farrow Says His 'Family Background Helped' Him Understand 'Abuse of Power'
Next Up: Editor's Pick