Here's How You Can Win HQ Trivia

If you are one of the hundreds of thousands of people who regularly play HQ Trivia, chances are you have yet to win.

Indeed, the popular trivia app — which functions more like a live game show anyone with a smartphone can participate in — is actually quite difficult. Players must get 12 multiple choice questions correct, and do so in under 10 seconds for each one. That makes it difficult to cheat, and, like most good trivia games, some of the HQ trivia questions are phrased in a way that influences the player to choose the wrong answer.

HQ Trivia winners split the jackpot at the end of the game, which is played daily and two times on weekdays. Depending on the size of the jackpot and the number of winners, players have won prizes as small as under $5 and as high as $6,000.

But for some HQ users, it’s not necessarily about the size of the prize, but the thrill of the win. (In fact, the thrilling reaction from one HQ player who won $11.30 in an recent game went viral.)

Here are a few tips that can help you win HQ Trivia.

Invite others to join HQ Trivia and earn extra lives

To do this, open your HQ Trivia app and click on “Get More” next to the hear that indicates how many extra lives you have. There, you can share your referral code on social media, over email or elsewhere.

If someone signs up for HQ using your code, you will get an Extra Life. The life will be used automatically in a game once you lose — and only one Extra Life can be used per game.

Open your HQ Trivia app and, using two fingers, swipe up several times quickly. According to Mashable, that will get you one free Extra Life.

A game of HQ Trivia often includes at least one “savage question,” as the game’s well-known host Scott Rogowsky describes it. That’s a trivia question with a set of answers that often result in the majority of players getting it wrong.

For example, a HQ trivia question from a January game asked, “Which of these events is NOT part of a modern pentathlon?” Among the three provided answers, “Laser Run” sounded the most likely for 278,100 players. But they were wrong (it was boxing).

Recognizing tricky questions like these is key to winning the game, some of HQ Trivia’s top winners have said. “You gotta know when they’re trying to trick you,” said Casey Donahue, a Los Angeles-based filmmaker who won $6,000 in one game on Dec. 24. “A lot of times their savage questions are made to get hundreds of thousands of people to pick one specific answer.”

The more the merrier. Playing with friends can increase your chances of winning since, well, it’s likely your pal knows some obscure fact that you don’t.

Since the game is also live at 3 p.m. ET on weekdays, playing with coworkers can help, too.

But, if you want to earn more cash, it’s probably best for you all to play HQ Trivia on your individual phones. That way you can split your winnings from that round’s jackpot, rather than splitting up the individual portion one player receives.

HQ’s Twitter account, which often interacts with players and shares news articles about the game, can also give out hints. That happened on one occasion in December ahead of a 9 p.m. game with a $8,500 jackpot.

In a tweet, HQ advised that “they play football north of the border too,” — hinting that a question may be about the Canadian Football League.

It’s unclear how often HQ’s Twitter account will provide hints or other advice for players. But if they’ve done it once, perhaps they’ll do it again. 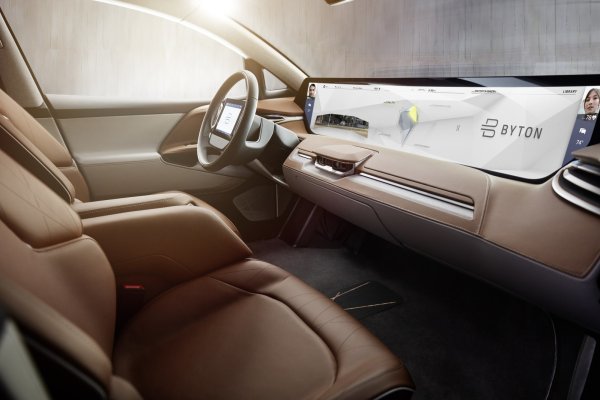 This Wild Concept Car Puts a Gigantic Screen in the Front Seat
Next Up: Editor's Pick