A professor’s first week teaching a new class titled “White Racism” was dominated by backlash from critics outside his classroom at Florida Gulf Coast University (FGCU), so much so that two campus police officers were stationed near the building as a precaution when his class met for the first time on Tuesday. But inside, students turned their attention to the syllabus and began digging into discussions about race as a social construct.

Ted Thornhill, an assistant professor of sociology at FGCU, has been bombarded in recent with weeks with hundreds of “malicious and vile” emails and phone calls from critics, many of whom used racial slurs and accused him of spreading intolerance based on the name of the “White Racism” class.

“It’s not an attack on white people. It’s an in-depth exploration of our racially stratified society that is based on white supremacy,” Thornhill told TIME on Thursday. “I don’t think people would be all up in arms if they actually understood the nature of the course.”

Thornhill, who is black and has been teaching classes on structural racism for a decade, has received messages asking why he doesn’t teach a class on “black racism” instead of “white racism” and arguing that racism is no longer an issue in the wake of a black U.S. president. He says those messages will become a relevant part of his lessons at FGCU this semester.

“I think we need to name white racism and how it manifests itself in different social spheres so as better to talk about it and root it out,” Thornhill said. “I think it’s really important for us to continue to offer these courses and to have these kinds of conversations in a direct manner.”

A description for “White Racism,” a sociology course, says students “will interrogate the concept of race; examine the racist ideologies, laws, policies, and practices that have operated for hundreds of years to maintain white racial domination” and will “discuss ways to challenge white racism and white supremacy toward promoting an anti-racist society where whiteness is not tied to greater life chances.”

A FGCU spokesperson said campus police officers were positioned near the building on Tuesday in case of any disruptions on the first day, but there weren’t any.

“Going forward, our police officers are maintaining their regular campus rounds engaging with students, faculty and staff, and of course should something related to the course arise which needs their attention, they’ll be responsive,” university spokesperson Susan Evans said in an email.

This is not the first time a professor has faced controversy because of their courses or lesson plans. In May, student protesters shut down a sociology class at Northwestern University after a professor invited both an Immigration and Customs Enforcement public relations officer and an undocumented immigrant to speak in back-to-back lessons. Last year, a professor at the University of Wisconsin-Madison started teaching a course titled “The Problem of Whiteness,” prompting complaints from a Republican lawmaker in the state, who called on the university to discontinue the class. The school defended the course and is offering it again this semester.

“I’ve never entertained the possibility of not teaching this course,” Thornhill said. “I do plan to teach the course again. There’s no reason why I wouldn’t.” 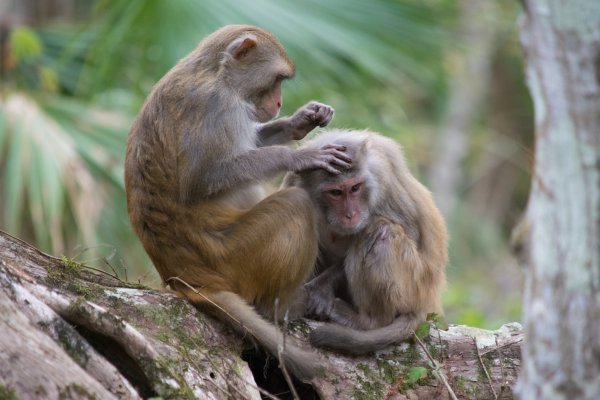 Florida Vows to Remove Monkeys From State Park After Report They Carry Deadly Herpes
Next Up: Editor's Pick