The mayor of San Juan, whose urgent demands for U.S. aid after Hurricane Maria shot her to political stardom, on what’s ahead for Puerto Rico

It was a year of great challenges and new beginnings. I started my second term as mayor of San Juan, and a new governor was elected with a new majority in the legislature. Even though he and I don’t see eye to eye, every beginning offers opportunities. That was immediately shattered not only by Hurricanes Irma and Maria but by policies that made protests somewhat illegal. Privatization of our public schools. Our labor unions lost rights that they have fought for for 40, 50 years. The economy was failing. We’re basically a colony of the United States, and the imposition of the fiscal control board started to become real. It wasn’t like, “Oh, they’re coming to help.” They were coming to control us. I opposed it from the beginning. I wish I had been wrong. But I wasn’t.

What were the days before and after the storm like?

We were starting to clean the debris of Irma when Maria appeared on Sept. 20, this huge cloud that grabbed ahold of the entire island. There was a sense of great impotence. There was nothing you could do but wait. We took shelter in a colosseum with about 685 people and about 200 employees. I knew they weren’t going to have a home to go back to. I saw the palm trees swaying like I’ve never seen them before. It was devastation. I knew that the country and the city that I had loved all my life were going to be there no more.

You’ve been vocal about the federal government’s role in all of this.

Their lack of role.

What did it do wrong?

The federal government didn’t do things right from the beginning. President Trump insulted the Puerto Rican people over and over and over. You know that Carly Simon song, “You’re so vain, you probably think this song is about you”? He probably thought that Maria was about him. But it wasn’t about him, it wasn’t about politics; it was about saving lives. FEMA was asking Puerto Ricans to go online and register for support. For heaven’s sake, we have no electricity. FEMA kept asking for memos, as if this were the first disaster that they had ever encountered. I finally lost my patience and stopped being politically correct. And I just shouted out an SOS to the world: “We’re dying here!” That didn’t make me a lot of friends in the federal government, but that’s my duty.

Can you talk about what happened with the Whitefish Energy contract?

First of all, we shouldn’t be rebuilding our grid, because it’s totally fossil-fuel-injected. We are going to get hit by another hurricane, and we don’t want to go through the same thing again. When we finally got access to the contract, we noticed strange things, like if the contract were rescinded, Whitefish would get paid anyway. I tweeted that the contract should be made available for everyone to see. Whitefish tweets back and says, “Mayor, we have 40 people coming today. Do you want us to send them back or keep working?” Look at the gall of a company hired by Puerto Rico, threatening an official for demanding transparency. When you ask for the truth and it blocks somebody’s lies, they get upset. Finally, the governor asked to rescind the contract. So now we’re back to square one.

Looking ahead to 2018, what’s your plan for the city and beyond?

As a Puerto Rican, not as a mayor, I believe that this is the opportunity to make our island nation more equitable and caring.

And what about as San Juan’s mayor?

I will dedicate my life to the eradication of poverty, to the end of colonization of Puerto Rico. I hope to make Congress respond to the values upon which the U.S. was built. I love them so much, I want them for my own country.

For more on this interview, visit time.com/carmencruz 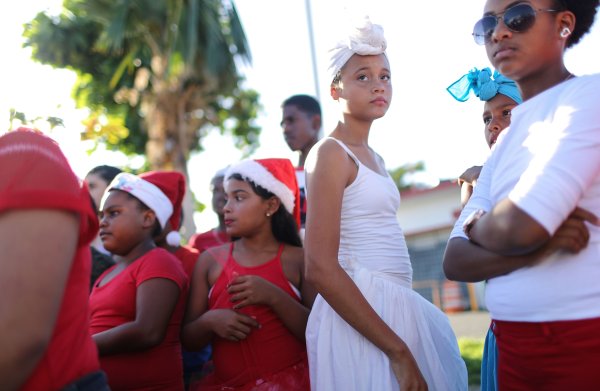 Tens of Thousands of People in Puerto Rico Will Still Be Without Power on Christmas
Next Up: Editor's Pick