In a rare admission of guilt, Myanmar’s military said that its soldiers were responsible for the deaths of 10 Rohingya Muslims found in a mass grave in the country’s western Rakhine state.

The results of an internal military investigation found that soldiers, along with local villagers, were culpable for the deaths of the Rohingya, who the military labeled “terrorists,” according to a statement posted to the Facebook page of Myanmar’s Commander-in-Chief.

James Gomez, Amnesty International’s Southeast Asia and Pacific director, said the acknowledgement marked “a sharp departure from the army’s policy of blanket denial of any wrongdoing.”

“However, it is only the tip of the iceberg and warrants serious independent investigation into what other atrocities were committed,” he said in a statement.

The mass grave was discovered last month in cemetery in Inn Din village, about 30 miles north of the state capital Sittwe, prompting the military to open an investigation. Previous internal inquiries have cleared the military of wrongdoing in Rakhine state, where an extensive campaign of violence has driven more than 650,000 Rohingya refugees into Bangladesh. The U.N. High Commissioner for Human Rights Zeid Ra’ad al-Hussein said the campaign amounts to ethnic cleansing that could include “elements of genocide.”

Myanmar contends that the operations are legitimate counterinsurgency measures in response to attacks by Rohingya militants on border guard posts in August.

According to the inquiry, the 10 Rohingya were arrested as part of a “clearance operation” after security forces were reportedly attacked by a group of about 200 on Sept. 1. In a statement, the military said that due to the fighting they could not transport the men so the detainees were executed by soldiers and local villagers instead of being handed over to police.

“Villagers and members of the security forces have confessed that they committed murder,” the military said in the statement, promising that those responsible would be “dealt according with the law.”

Amnesty’s Gomez called the explanation for the killings “appalling” and reiterated calls for a U.N. fact finding mission to be granted access to northern Rakhine to investigate the alleged atrocities. Members of the body, formed in March last year, have been repeatedly denied visas to enter Myanmar.

Two Reuters journalists who were also investigating the incident were arrested last month for allegedly acquiring “important secret papers” from two police officers. On Wednesday, the reporters, Wa Lone and Kyaw Soe Oo, were charged with violating Myanmar’s Official Secrets Act, which carries a penalty of up to 14 years in prison. 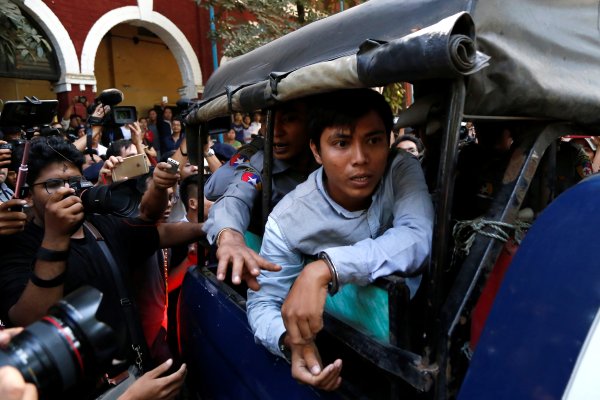