For more than a week, the nation’s capital has been consumed by Fire and Fury — the explosive new book about the Trump Administration written by Michael Wolff that now tops the New York Times bestseller list. Meanwhile in Canada, the author of a lesser-known book with the same title has been pleasantly surprised to see a readership spike of his own.

Randall Hansen, interim director of the Munk School of Global Affairs at the University of Toronto, said sales for his 2009 book — Fire and Fury: The Allied Bombing of Germany, 1942-1945 — jumped in the past week. His book focuses on the bombing tactics that killed hundreds of thousands of German civilians during World War II, while Wolff’s book chronicles turmoil within Donald Trump’s White House.

“Will I owe a larger royalty cheque to Bannon & Trump? If so, the irony will know no limits,” Hansen tweeted the day after Wolff’s book was released.

Some of Hansen’s new readers might have purchased his book intentionally after stumbling upon it while searching for Wolff’s, but at least a few reviewers on Amazon voiced frustration that the book they purchased was not what they had expected.

“I DON’T SEE ANYTHING ABOUT PRESIDENT TRUMP! I DON’T KNOW WHY THE DEMOCRATS ARE SO HAPPY WITH THIS BOOK AND MAKEINIG A BIG DEAL OF THIS !” one person wrote.

“I love Trump, so I bought this book to spite Wolf,” said another.

A third directed confused customers to the page where they could buy Wolff’s book.

“If a few more people read my book now and reflect on the horrific consequences of war to civilian populations,” Hansen told the Washington Post, “I think that would be a very good outcome.” 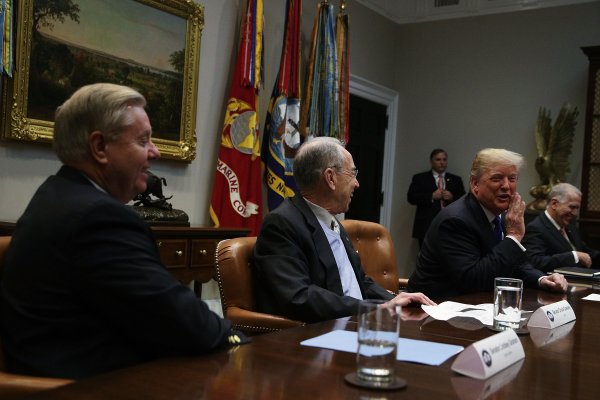 Sen. Lindsey Graham: If President Trump Doesn't Call Himself a Genius 'Nobody Else Will'
Next Up: Editor's Pick