The Force just wasn’t with the Pentagon’s No. 2 civilian when he tried to inject “Star Wars” references into a memo setting up the Defense Department’s multibillion-dollar cloud computing initiative.

“C3PO is authorized to obligate funds as necessary in support of the JEDI Cloud,” Shanahan, a former Boeing Co. executive, wrote, managing to get a beloved droid from the space-themed movies and an equally popular fictional order of warriors into what otherwise would be a routine message in the Pentagon bureaucracy.

The memo was recalled because “it was issued in error,” according to Shanahan’s spokesman, Navy Captain Jeff Davis.

The official Star Wars.com website describes C-3PO as “a droid programmed for etiquette and protocol built by the heroic Jedi Anakin Skywalker.” The JEDI Order, typified by Luke Skywalker, is defined as a “noble order of protectors unified by their ability to tap into the power of the Force” to serve as “guardians of peace and justice in the Galactic Republic.”

On Earth, Shanahan and Ellen Lord, the Pentagon’s chief weapons buyer, are leading the effort to move the Pentagon toward cloud computing in a bid to preserve the U.S. military’s technological advantages over China and Russia while finding new ways to secure sensitive databases.

Lord has said separate data silos — even within each military service — prevent real-time sharing of information among war-fighters and adoption of new technologies such as machine learning and artificial intelligence. An “industry day” that’s still to be scheduled is planned before a request for proposals to be issued by March 31. 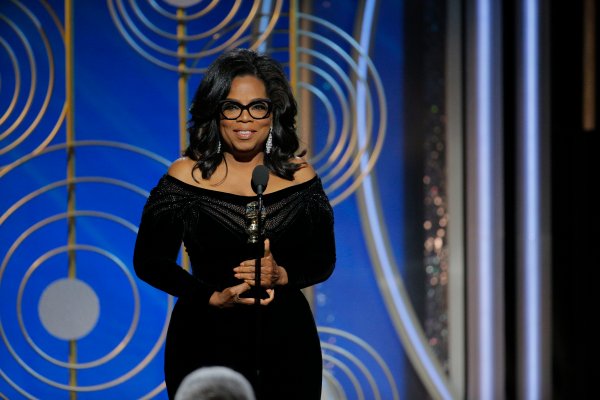 'Praying for Our Community.' Oprah’s Home Was in the Middle of the California Mudslide
Next Up: Editor's Pick