Congress May Be Moving Closer to a Compromise on Dreamers

A morning meeting at the White House showed progress in ongoing discussions over the future of immigrants brought to the U.S. as children.

President Trump hosted a bipartisan meeting with lawmakers to discuss a compromise on immigration issues, including the how to deal with participants in Deferred Action for Childhood Arrivals, an Obama-era program the Administration is winding down.

By the time the Tuesday discussions came to a close, lawmakers had agreed to focus on a narrow plan that includes four main components: a permanent solution for DACA recipients, border security and reforms to the diversity-visa lottery program and what the President calls “chain-migration,” or when immigrants sponsor relatives to join them in the U.S., the White House said in a statement. The group also appeared to agree to take up the issue of immigration in two parts: first by handling DACA recipients and securing the border, and later via a comprehensive immigration reform plan.

The exact details of the deal have yet to be ironed out—an immigration working group is expected to meet this week to continue negotiations—but Republican lawmakers walked away confident that they would be able to get something done.

“What was most productive was that the president embraced a solution, no animosity toward to Dream-Act kids, and understanding that the wall is not going to be 2,200 miles wide,” said Sen. Lindsey Graham, a Republican from South Carolina and a co-sponsor of the Dream Act. “There’s no reason we can’t get there.”

Republican Sen. James Lankford of Oklahoma told reporters on Capitol Hill after the meeting that the narrow focus of the bill is a good step forward. “Our biggest battle for the last several months has been to get the scope to actually what will be in the negotiation and today that got defined out,” Lankford said.

And for almost an hour, those negotiations played out in front of the news media, which had been invited in for a photo opportunity. It was a rare opportunity for reporters to actually sit in on high-level negotiations as they happen, rather than try to recreate the scene from readouts and off-the-record accounts from attendees. The meeting also provided a glimpse of the diverse perspectives that exist on the issue of immigration on Capitol Hill. And it showed how difficult it can be to parse out exactly what President Trump wants.

When reporters entered the Cabinet Room, where Trump and a group of around two dozen lawmakers had gathered for the meeting, the President was seated next to a Democrat who predicted just days ago that the commander-in-chief’s hardline demands would imperil chances of getting something done. “President Trump has said he may need a good government shutdown to get his wall,” Sen. Richard Durbin of Illinois said in a statement on Friday. “With this demand, he seems to be heading in that direction.”

With the Illinois Democrat by his side, Trump called on lawmakers to “put country before party” and pass a permanent solution to DACA and a long-term spending bill in the coming weeks.

“I really do believe Democrat and Republican, the people sitting in this room, really want to get something done,” Trump said. “I hope we’re going to come up with an answer for DACA.”

After the meeting, Durbin said in a statement that everyone in the room agreed there is an urgent need for a DACA fix. But, while Republicans laid out their priorities at the Tuesday meeting, Durbin said Democrats’ priority remains the Dream Act, which would give DACA recipients a pathway to citizenship.

At one point during the meeting, Democratic Sen. Dianne Feinstein of California asked the President if he would be willing to accept a “clean” version of the Dream Act in which Congress only voted on that specific issue. The president’s first response was, yes, but House Majority Leader Kevin McCarthy chimed in to say any proposal would have to include border security. Trump said he thought that’s what Sen. Feinstein meant, but Democrats jumped in to clarify that was not the case.

In the meeting, Graham also implored the president to help Congress “close the deal” if and when it comes down to passing a major immigration overhaul. “You created an opportunity here, Mr. President, and you need to close the deal,” he told the President, according to a pool report.

“If you want to take it that further step, I’ll take the heat,” the President responded. “You are not that far away from comprehensive immigration reform.”

Getting to that next step won’t be easy. Congress has not passed a comprehensive immigration reform package in over three decades. The last time they tried, in 2013, the bill passed the Senate only to never reach the House floor for a vote. The fact that members on both sides of the debate trekked to the White House on Tuesday shows there exists some political will to get something done on DACA and, possibly, on broader reform. But, a lot of loose strings remain.

Senate Minority Leader Chuck Schumer told reporters on Tuesday that he does not believe any bill to protect DACA recipients from deportation would reach the floor for a vote if it is not included in a must-pass bill. “The bottom line is, it must go in a must-pass bill and the only must-pass bill that we see coming down the road between now and March 5th is this bill,” Schumer said, referring to the Jan. 19 spending bill that is before the Congress.“We continue to believe, insist, that it be in this bill.”

The details of the DACA solution also remain to be determined. Democrats and some Republicans are pushing for a bill that aligns closely with the Dream Act, which would offer DACA recipients a pathway to U.S. citizenship. More conservative members want legislation that also curbs some family migration and takes aim at the diversity visa lottery program. And Trump wants all of those things plus a wall along the southern U.S. border.

Veterans of immigration reform who are still tending the wounds left by past battles on the issue, warn that the bigger these negotiations get, the harder it is to get anything done. “I’ve seen debates, discussions and negotiations where the Republicans and the Democrats find the sweet spot in the overlap and when they don’t,” Frank Sharry of the immigration reform group America’s Voice said at a roundtable discussion last week. “Balance and proportionality [are] essential to finding the sweet spot.”

On Tuesday, TIME spoke to Republican Rep. Will Hurd who worked with Democratic Congressman Pete Aguilar of New York on a narrow solution that beefs up border security and provides so-called Dreamers a pathway to citizenship. The Texas Republican, whose district is along the U.S. border with Mexico, said his bill could serve as a framework to build upon if other elements need to be included in order to get a final deal done.

“This is our attempt to try to solve a big problem and get more colleagues involved,” Hurd told TIME on Monday. “I think everybody agrees that the only way we’re going to get this problem done is in a bipartisan way. I think most people realize that you’ve got to solve this problem for almost 1 million kids that have only known the United States of America and have been contributing to our society, culture, and history.”

Chair of the Congressional Hispanic Caucus Michelle Lujan Grisham, who crashed the White House meeting on Tuesday said that she felt good about the president’s insistence that he would sign a bill that solves the DACA issue. She did, however, push back on the idea that family reunification, or “chain migration” and the diversity visa lottery program should be included in the final package.

“There seems to be much broader consensus that there’s a variety of places to go on border security that would be fairly amenable to both parties,” Lujan Grisham said. “When you start to deal with immigration reform issues, it gets a lot tougher, which is why I’m going to keep pushing — let’s do the thing that makes sense, where there’s broad agreement.” 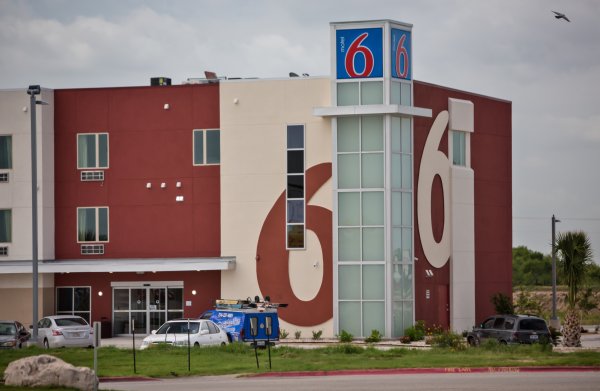 Motel 6 Is Being Accused of Sharing 'Latino-Sounding' Names of Guests with ICE
Next Up: Editor's Pick