The Mascot for the 2018 Winter Olympics Is Soohorang the Tiger. Here’s Why

Soohorang the Tiger, an official mascot of the 23rd Olympic Winter Games in Pyeongchang, seen at Incheon International Airport in Seoul.
Sergei Bobylev/TASS—Getty Images
By Olivia B. Waxman

While Olympic athletes can sometimes seem superhuman, at least one central figure at Friday’s opening ceremony of the 2018 Olympic Winter Games in PyeongChang, South Korea, will not be human at all. This year’s official Olympic mascot, Soohorang, is a white tiger. And, while Soohorang is new to the scene, there are centuries of history behind why the tiger was chosen to represent these particular Winter Olympic Games.

Unpacking the mascot’s name will tell you a lot already. In Korean, “Sooho” means protection, symbolizing “the protection offered to the athletes, spectators and other participants of the 2018 Games,” according to the official Olympics website. The final syllable, “rang,” comes from the Korean word for “tiger,” which is “Ho-rang-i.” And as a nod to the host city, it’s also part of the title of a traditional folk song of the province in which PyeongChang is located.

In fact, Siberian (or Amur) tigers are one of the folk symbols most closely associated with Korean culture, and their association with protection has evolved over the course of centuries. For example, the protective function of the tiger is on display at the royal tombs of the Joseon Dynasty, where stone tiger statues “protect” the tombs, which are a UNESCO World Heritage site. The tombs contain the remains of kings and queens dating back to the 15th century and are considered in the best condition of the sites for ancestral worship in the country. The color of the tiger is also considered significant. White tigers have been seen as sacred guardians in Korean folklore, so ancient Koreans designed talismans shaped like tigers to ward off evil spirits.

Members of the Japan team pose with mascot Soohorang ahead of the PyeongChang 2018 Winter Olympic Games on Feb. 7, 2018.
Robert Cianflone—Getty Images

In the early 20th century, the tiger’s protective role took on a new level of meaning. Koreans seized upon it as a symbol of ethnic pride and identity when the country was a Japanese colony, between 1910 and 1945, as historians Joseph Seeley and Aaron Skabelund explained in a 2015 Environmental History journal article on the topic. They cite a 1908 editorial that “expressed the hope that images of the peninsula as a tiger, the ‘fiercest and strongest of all creatures,’ could help cultivate the ‘will and spirit (chigi)’ of young Koreans.”

Today, with South Korea a thriving and independent nation, the tiger is still seen as a nationalistic symbol of economic strength, representing “the urban and aggressively successful modern South Korean economy,” as Asia Society has put it.

Some believe the tiger became the symbol of Korea because the Korean peninsula is shaped like a tiger. (Just look at Google Images.) Yet, while depictions of tigers aren’t heard to find in Korea, the actual animals are. Early-20th century hunters are largely to blame —and South Korea was still importing tiger bones for medicinal purposes until that was banned in 1993 — but the situation may be changing.

For decades, not a single wild tiger sighting was reported in the Baekdudaegan mountain range on the southern Korean Peninsula, after the last known example was captured at Gyeongju nearby in 1921. In Jan. 2017, the country’s forest service released a pair of tigers donated by China into a new specially designed breeding ground. “[E]xtermination encouraged an increased feeling of closeness and affinity for the animal,” as Seeley and Skabelund wrote. “Nostalgia for tigers in modern South Korea have led some to consider bringing them back, though ultimately the difficulties of reintroducing Asia’s largest predator into one of the world’s most densely populated regions has imposed limits on what that means.” In fact, scientists may have a better shot spotting the animals in North Korea. In 2015, Russian scientists from Moscow’s Natural Resources Ministry reportedly discussed helping North Korea count the wild animals.

Tigers have a place in Korean Olympics history, too. Before Soohorang, there was Hodori, an orange tiger that the Korean public chose to represent the 1988 Summer Games in Seoul. Boasting a name that’s a portmanteau for “male tiger,” the mascot was decked out with the Olympic rings around his neck and a traditional farmer’s dance hat known as the “Sangmo” that had a S-shaped streamer standing for “Seoul” jutting out of it, according to James F. Larson’s and Heung-Soo Park’s Global Television and the Politics of the Seoul Olympics. (The authors also note that it looked so much like “Tony the Tiger” on the Frosted Flakes cereal boxes that Olympic organizers just narrowly avoided a copyright infringement suit, after agreeing not to sell the rights to the mascot to Kellogg rivals.)

In fact, the mascot did raise some awareness about the plight of the Siberian tigers.

“Zoos that had previously only housed Bengal tigers eagerly imported Siberian tigers and quickly bestowed on them the moniker of ‘Korean’ tiger,” Seeley and Skabelund wrote.

In the long-term, it will take much more than another Olympics to bring tigers back to the Korean peninsula. Experts say the best way to keep the Korean tigers alive is probably to focus on conserving the remaining estimated 450 Siberian tigers in Asia, especially Russia’s Far East. For now, however, as Soohorang is watched by Olympics fans around the globe, the tiger mascot may help his wild brethren — and, at the very least, he will add one more chapter to Korea’s centuries-long embrace of the tiger. 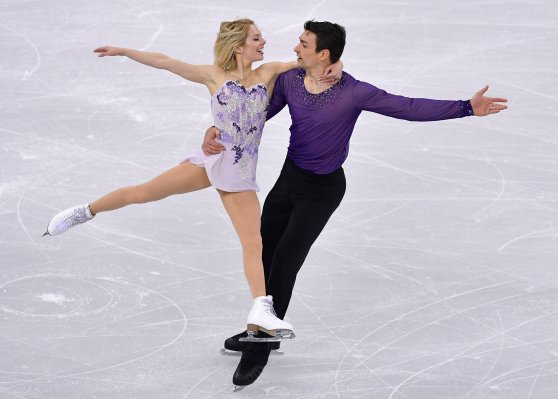 8 Olympic Ice Skating Pairs Who Are Couples in Real Life
Next Up: Editor's Pick