North Korea will send a delegation to the 2018 Winter Olympics in Pyeongchang, following the country’s first formal talks with South Korea in more than two years.

Between a testy relationship with South Korea and a complicated past with the Olympics, it was unclear whether North Korean President Kim Jong Un would allow the athletes to attend the games prior to the talks between the two countries on Tuesday. North Korea boycotted the last Olympics held in South Korea, the 1988 games in Seoul. The country also missed the International Olympic Committee’s deadline to register its team for this year’s games (the committee extended its deadline in an effort to get North Korea to sign up).

The North Korean Olympic delegation will include athletes, high-ranking officials and a cheering squad. Two North Korean athletes have qualified for the 2018 Olympics — the figure skating duo Ryom Tae-ok and Kim Ju-sik qualified for the event last September without knowing whether their country would even allow them to compete in the games.

The 2018 Winter Olympics kick off in Peyongchang, South Korea, which beat out Munich, Germany, and Annecy, France to become the venue. The Olympic games begin on Feb. 8, 2018 and go through Feb. 25, 2018.

Look back at North Korea’s performance in past Olympic Games below.

When was the last time North Korea competed in the Olympics?

North Korea’s announcement that its athletes can compete in the Olympic Games in South Korea is an optimistic sign for relations between the two countries. But while North Korea boycotted a prior Olympics held in Seoul along with the 1984 Olympics in Los Angeles, the country has a rich history of competing in other Olympic Games over the years.

How many Olympic medals has North Korea won? 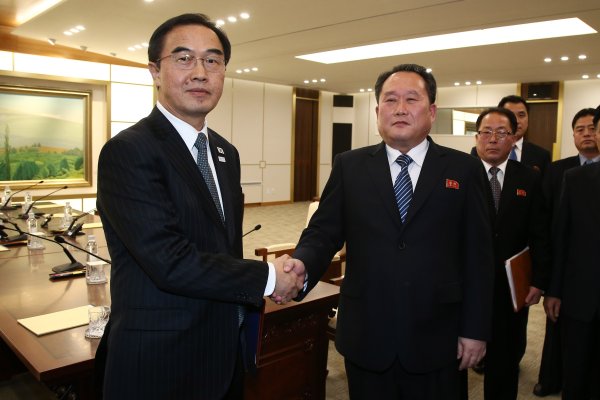 North and South Korea Agree to Talks
Next Up: Editor's Pick