The Best Joke George W. Bush Ever Told in Office

Most presidents understand that making fun of themselves is endearing. Barack Obama has a sharp sense of humor and much-lauded comic timing, but he also knew how to ham it up when the situation called for it. Every Thanksgiving when he “pardoned” a turkey while his daughters stood alongside him, he told “dad jokes” as they visibly winced. In his final turkey-pardoning ceremony in 2016 (with his two young nephews standing in for teenaged Sasha and Malia), Obama promised a “corny-copia of dad jokes,” and he delivered. “When somebody at your table tells you that you’ve been hogging all the side dishes, you can’t have anymore,” he said, “I hope you respond with a creed that sums up the spirit of the hungry people: Yes we cran.”

Ronald Reagan loved to make jokes. According to a classic Washington yarn, he wasn’t even afraid to jest with the queen of England. In 1982, while he was on a horseback ride with the queen on the grounds of Windsor Castle, the queen’s horse is said to have had a bout of prolonged flatulence. The queen reportedly said, “Oh dear, Mr. President, I’m so sorry!” and Reagan supposedly replied, “Quite all right, Your Majesty. I thought it was the horse.”

Jimmy Carter, after leaving office, continued to poke fun at himself: “My esteem in this country has gone up substantially. It is very nice now when people wave at me, they use all their fingers.”

Calvin Coolidge, known as Silent Cal, was once seated next to a young woman at a dinner party, who told him that she had a bet she could extract at least three words of conversation from him. “You lose,” he replied.

Abraham Lincoln was renowned for his self-deprecating humor and elaborate story spinning, especially during long meetings with favor seekers. (“Were it not for my little jokes,” he once said, “I could not bear the burdens of this office.”) He had a favorite story about a time when he was splitting rails and a man carrying a rifle walked up to him and demanded that Lincoln look him directly in the eye. Lincoln stopped his work and obliged the man, who continued to stare silently at him for some minutes. Finally the man told Lincoln that he had promised himself years ago that if he ever met a man uglier than himself, he would shoot him. Lincoln looked at the man’s rifle, pulled open his shirt, puffed out his chest, and allegedly exclaimed, “If I am uglier than you are, I don’t want to live. Go ahead and shoot.”

George W. Bush was often the target of comedians for his malapropisms. He was never bothered by it, though, because he understood the value of a good laugh. The ribbing he received was embraced with affection at the White House; the regular meeting of top national security officials in the Bush White House was even renamed “The Strategery Meeting” after Will Ferrell, as Bush, used the word on Saturday Night Live. Terms such as misunderestimate and I’m the decider became part of the West Wing lexicon. He even beat comedians to the punch by telling many jokes at his own expense. He opened the 2005 Correspondents’ Dinner, for example, by saying, “I look forward to these dinners where I’m supposed to be funny . . . intentionally.” He always understood that when you make fun of yourself, you take away the power of your detractors.

George W. Bush once used his self-deprecating humor to come to the aid of Lea’s daughter. Lea and her daughter were at a farewell dinner the Bushes threw her when she left the White House, and her daughter, Alice, then 14 years old, was seated next to the president. He asked her how school was going, and she whispered that she was failing algebra but hadn’t worked up the nerve to tell Lea yet. When the president heard this, he interrupted the table conversation, turned to Lea, and said, “Mom! Alice is flunking math, but you shouldn’t worry about it because I didn’t do very well in school either, and things turned out all right for me.” And he raised his shoulders to indicate where we were seated, in the Yellow Oval Room with the Truman Balcony and the Washington Monument beyond. The table erupted in laughter — and no one laughed harder than Alice. Years later, when President Bush saw Alice again, he greeted her by saying, “Haven’t you graduated yet?”

He smiled and patted her on the back. “So we both made it through.” 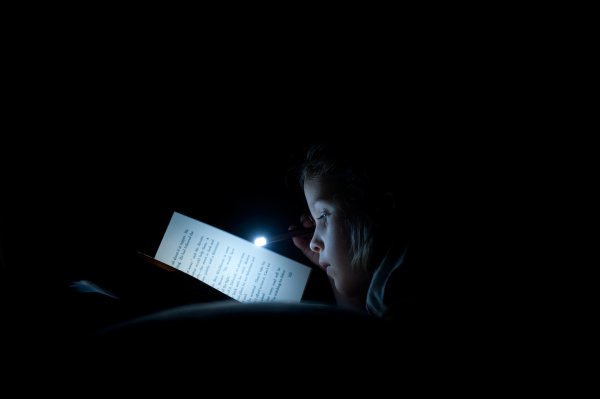 Why We Shouldn’t Shield Children From Darkness
Next Up: Editor's Pick