Thailand’s junta leader Prayuth Chan-ocha has come up with a novel way to deflect journalists’ questions: just pass them off to a cardboard likeness.

At a press conference in Bangkok, Prayuth, who serves as prime minister of the country’s military-run government, briefly addressed a crowd of reporters and families, according to the BBC. It appeared as if he was going to finish the event by taking questions, but Prayuth had something else in mind; supervising the installation of a life-sized cardboard cut-out of himself.

“If you want to ask any questions on politics or conflict, ask this guy,” the Prime Minister said before walking away. Social media users were quick to respond.

Since Thailand’s military seized power in a 2014 coup, Prayuth has had an openly antagonistic relationship with the media. In 2015, he boasted that he would execute journalists who “did not report the truth” about his government, which has often used draconian defamation laws to prosecute critics and activists. Under his tenure the country has restricted media freedoms, forced television networks off the air and dropped from 129 to 140 out of the 180 nations ranked by Reporters Without Border’s annual Press Freedom Index. 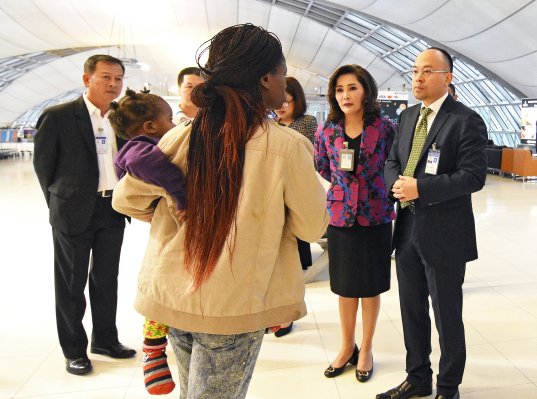 Zimbabwean Family Stranded in Bangkok Airport for Months
Next Up: Editor's Pick