Myanmar sought charges Wednesday against two Reuters journalists who stand accused of breaching the state secrets act, in a case that has renewed fears about press freedom in the country.

Reporters Wa Lone and Kyaw Soe Oo were arrested on Dec. 12 for allegedly “illegally obtaining and possessing…important and secret government documents,” Myanmar’s Ministry of Information quoted police as saying. The reporters had met two police officers for dinner on the outskirts of Yangon, the country’s largest city, where they were handed documents believed to pertain to military operations against the Muslim Rohingya minority in Rakhine state.

Prosecutors filed charges against the two journalists under Myanmar’s Official Secrets Act, an obscure law dating from 1923, under which they face up to 14 years in prison. Wednesday’s hearing was their second court appearance since being arrested almost one month ago. The reporters had been held incommunicado at an undisclosed location by police for several weeks following their arrest, raising concerns that they had become victims of enforced disappearance. The court extended their custody at an initial hearing on Dec. 27 while their charges were investigated.

The reporters later told relatives that they were detained almost immediately after receiving the documents, Reuters reported. Senior representatives of Myanmar’s ruling National League for Democracy Party (NLD), whose government does not control the country’s police or military, have suggested that the reporters were set up.

“They arrested us and took action against us because we were trying to reveal the truth,” Wa Lone said following the hearing, which lasted about 30-minutes, according to Reuters.

“The prosecution of these two journalist shows both the government’s contempt for freedom of the press and a fundamental failure to understand what journalists’ jobs are all about,” he told TIME. “These two men should be released immediately and unconditionally.”

In November, Secretary of State Rex Tillerson demanded the journalists’ “immediate release or information as to the circumstances around their disappearance,” while E.U. representative to Myanmar Kristian Schmidt warned that their prosecution “amounts to a series intimidation against journalists” in Myanmar. “Journalists should … be able to work in a free and enabling environment without fear of intimidation or undue arrest or prosecution,” he said on Monday.

Former President Bill Clinton also commented on the case in a Twitter post on Tuesday, saying “the detention of journalists anywhere is unacceptable.”

Reuters president and Editor-in-Chief Stephen J. Adler said in a statement that he was “extremely disappointed” by the ruling. “We view this as a wholly unwarranted, blatant attack on press freedom. Our colleagues should be allowed to return to their jobs reporting on events in Myanmar,” he said.

The case has also renewed concerns about the state of press freedom in Myanmar under Aung San Suu Kyi, whose government has employed colonial-era legislation, previously wielded by the country’s notorious military junta, to silence critics and intimidate journalists. Last month, Myanmar released two foreign journalists and their two local staffers, who had served two months in prison under the 1934 Aircraft Act for filming with a drone in Naypyitaw, the country’s capital. 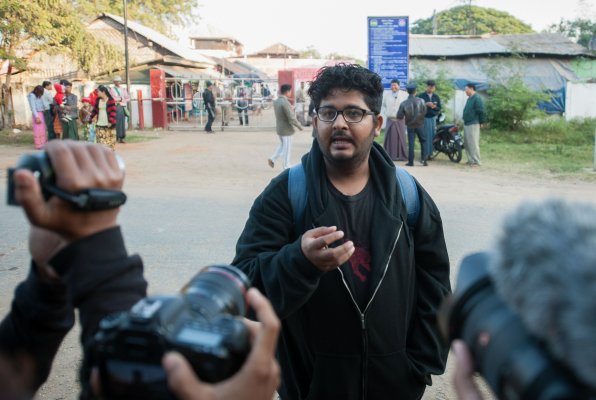