After Rare Talks With the South, North Korea Will Send a Delegation to the Winter Olympics

North Korea said during rare talks with the South on Tuesday it will send a delegation to the Pyeongchang Winter Olympics in South Korea next month and Seoul said it was prepared to lift some sanctions temporarily to facilitate the visit if needed.

North Korean officials at the first formal talks with South Korea in more than two years said their delegation for the Games would consist of athletes, high-ranking officials and a cheering squad.

The talks are being closely watched by world leaders eager for any sign of a reduction in tensions on the Korean peninsula amid rising fears over North Korea’s missile launches and development of nuclear weapons in defiance of United Nations Security Council resolutions.

However, some South Korean officials have said they see the Olympics as a possible opportunity for easing tensions.

Foreign ministry spokesman Roh Kyu-deok said Seoul would consider whether it needed to take “prior steps”, together with the U.N. Security Council and other relevant countries, to help the North Koreans visit for the Olympics.

South Korea also proposed that athletes from the two Koreas march together at the Games’ opening ceremony and other joint activities between during the Winter Olympics, Chun told reporters outside the talks.

Athletes from the two Koreas have paraded together at the opening and closing ceremonies of major international games before, although it has not been seen since the 2007 Asian Winter Games in China after relations chilled under nearly a decade of conservative rule in the South.

It would also be the first time since 2005 for the North to send its female cheerleaders, dubbed the “cheering squad of beauty” by South Korean media.

The meetings continued on Tuesday afternoon after the two sides broke up for separate lunches. Officials began speaking at 10 a.m. (0100 GMT) in the three-storey Peace House just across the demilitarised zone on the South Korean side of Panmunjom truce village.

“North Korea said that they are determined to make today’s talks fruitful, and make it a groundbreaking opportunity,” South Korea’s Chun said.

Chun also said the South Koreans proposed resuming negotiations over the North’s nuclear programme but there was no specific response from the North Koreans.

However, North Korean officials said during the meeting they were open to promoting reconciliation between the two countries through dialogue and negotiation, according to Chun.

The head of the North Korean delegation, Ri Son Gwon, said in opening remarks: “We came to this meeting today with the thought of giving our brethren, who have high hopes for this dialogue, invaluable results as the first present of the year …”

North Korea entered the talks with a “serious and sincere stance”, said Ri, chairman of the North’s Committee for the Peaceful Reunification of the Fatherland.

“Our talks began after North and South Korea were severed for a long time, but I believe the first step is half the trip,” said Cho. “It would be good for us to make that ‘good present’ you mentioned earlier.”

“Everything feels slightly new as we have not had talks in a while,” he said.

Just before the delegation drove into the demilitarised zone, some 20 South Koreans were seen waving a banner that read: “We wish the success of the high-ranking inter-Korean talks”.

One man was spotted waving a flag with a unified Korean peninsula.

The delegations were made up of five senior officials from each side.

The North Korean delegation walked over the border inside the joint security area to the Peace House around 0030 GMT, an official from the South’s Unification Ministry told reporters.

The United States, which has 28,500 troops stationed in South Korea as a legacy of the 1950-1953 Korean War, initially responded coolly to the idea of inter-Korean meetings, but U.S. President Donald Trump later called the talks “a good thing”.

Trump has said he would like to see talks go beyond the Olympics. “At the appropriate time, we’ll get involved,” he said.

China’s Foreign Ministry said on Tuesday it was happy to see talks between North and South Korea take place and welcomed all positive steps. 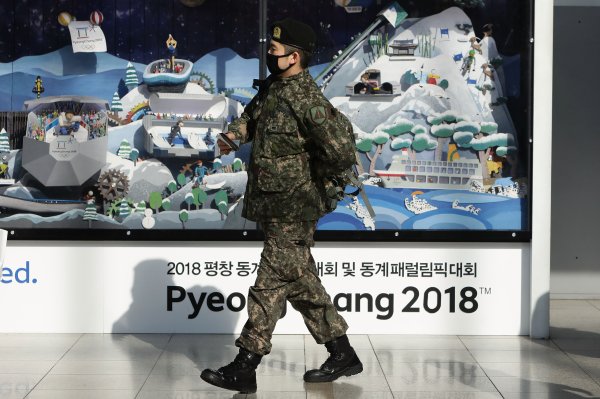