We Need Oprah to Be Our Oprah, Not Our President

At the Golden Globe Awards Jan. 7, Oprah Winfrey did what she’s done practically throughout her career: speak frankly, directly and powerfully to an audience that took particular solace in her words. Drawing on stories of women of powerful endurance—including Rosa Parks, rape victim Recy Taylor, and Winfrey’s own mother—the entertainment mogul built to a rousing and hope-filled conclusion. “I want all the girls watching here, now, to know that a new day is on the horizon!” It was classic Oprah, with just one difference. The audience response wasn’t just applause, it was a demand: Run for President in 2020.

Practically as soon as Winfrey left the stage, the notion that she would campaign for — and who knows? Maybe win! — the presidency in the next election swept across social media. The audience had been primed by host Seth Meyers, who jokingly-but-not exhorted Winfrey to run in his monologue; NBC, which airs the Golden Globes, jokingly referred to her as “OUR future president” on social media. When a reporter for the Los Angeles Times asked her partner, Stedman Graham, about the idea, Graham said she would “absolutely do it. It’s up to the people.” The Oprah 2020 idea seemed an increasingly real possibility as the night unfolded, and the audience zeal is still contagious. Understandably so: not only is Winfrey hugely popular, but it would mark a historic occasion for women, particularly women of color, who remain underrepresented in positions of power. (That Winfrey briefly, glancingly denied interest in running in a backstage interview mattered little, not least because CNN reported she was “actively thinking” about the office. How many times did Hillary Clinton deny a 2016 run was in the cards?)

Winfrey has been floated for political office before, and her endorsement of Barack Obama was a pivotal 2008 campaign moment as well as a test bubble of whether the Oprah brand worked at the ballot box. She’s certainly media-savvy enough to know how her speech would land. But the volume and the passion of the response to her speech was a genuine surprise. After all, Winfrey has been speaking in a stirring way on public stages for decades without such an outpouring of support for America’s projected ambitions.

We used to write fan letters or, more recently, tweet praise at our favorite celebrities; in the Trump era, we draft them to our fantasy team. Winfrey’s certainly a favorite—her Q score, measuring celebrity popularity, is above average, and she had a strong favorable rating in an earlier 2017 poll that indicated she’d beat Trump in a head-to-head 2020 matchup. But you don’t need to be an Oprah-level megastar to get the “for President” treatment: Winfrey’s moment comes along with those of Tom Hanks, also urged to run for office by Meyers at the Golden Globes, and Dwayne Johnson, who’s responded with affable bafflement but left the door open. If Winfrey runs—imagine!—she’d likely clear the field, but if she rules it out, surely five more American-born movie stars or musicians over 35 will face down questions. (Beyoncé, having recently turned 36, is eligible; Nicole Kidman, born in Hawaii, is too!) It makes sense: If the current president rose to prominence in the tabloids and stayed there as a reality-TV star, doesn’t Winfrey seem like an even more credible option, among other superlatives?

But it’s a troubling trend, not least because liberals sympathetic to a Winfrey candidacy seem to have learned nothing from what they dislike about President Trump. Replacing a political amateur with a political amateur with good intentions doesn’t solve certain core problems the executive branch is suffering at the moment. Winfrey has given her fans every indication through the years that she is a skilled executive, a genius of empathy and a deep reader of literature (a sharp contrast to our current post-literacy president), but it’s not exactly pedantic to suggest, as various positions lie unfilled and as America’s status on the world stage sinks, that some level of experience is needed to run the federal government.

The mingling of political and cultural celebrity — a radical shift in American life after the election of a pop-culture star to the presidency — can’t be reversed. An audience that once might have looked at an inspiring speech as, well, an inspiring speech now reads it as stumping by any other name. What gets lost, though — what’s easy to forget in an era during which the president generates seasons’ worth of reality-TV-ready outbursts — is that a president is supposed to do more than speak out. What would a President Winfrey’s stance on North Korea, or housing, or greenhouse-gas emissions be? What would happen in a FEMA crisis or an urgent national security threat?

She would no doubt be a skilled diplomat. But the truest sign that the world has tectonically shifted post-Trump is that it hardly matters. A Winfrey presidency, ardently rooted for by many, would give us made-for-TV moments of catharsis and inspiration; we would for four years, or eight, be riveted. Trump swears we will get tired of winning; Winfrey would make us tired of living our best lives. A Winfrey run might actually be the most sensible end result of the Trump presidency: It would reverse aspects of his temperament but keep in place the core way he’s changed America, the idea that the power of the presidency and the fame of the officeholder should compound upon themselves until we’re all so entertained we can think of nothing else. 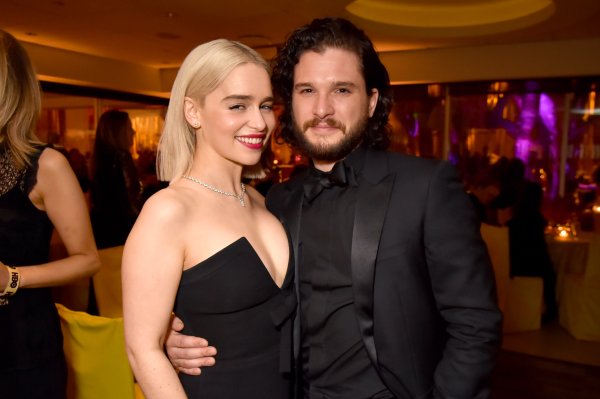 Jon Snow and Daenerys Targaryen Quenched Game of Thrones Fan Thirst With a 2018 Golden Globes Reunion
Next Up: Editor's Pick