Is Vitamin-Enhanced Water Better For You Than Regular Water?

Water used to come in just one flavor: plain.

But it wasn’t long before entrepreneurs saw an opportunity for H2O 2.0. If plain water is good for you, then water enhanced with vitamins, minerals and electrolytes must be even healthier — right?

Not quite. “Most of the claims are marketing ploys to sell water at a higher price,” says Bonnie Liebman, director of nutrition at the Center for Science in the Public Interest, a consumer advocacy group. “They are not about scientific evidence, and not about the public’s health.”

But that hasn’t stopped people from buying it. Sales of bottled water in the U.S. increased more than 6% to $15 billion in 2015, according to a report from the market research agency Mintel, and much of that interest came from water enhanced with vitamins.

These types of “nutritional” waters — including Vitaminwater, Propel and Lifewtr made by beverage giants Coca-Cola, Pepsi and smaller start-ups — are enhanced with everything from vitamins, minerals and other seemingly “healthy” additives such as electrolytes. They come in every flavor and color: even blk.water, a murky beverage that claims to contain fulvic acid and other minerals from soil, aquatic environments and sediment.

The implied message behind boosted waters like these is that drinking them can give you more of what’s good for your body. But it’s worth looking closely at what’s in the water and why. Electrolytes, for example, are added to some waters (like Lifewtr) simply for taste, and aren’t present in large enough quantities to likely make much of a health impact.

Plus, most Americans get the nutrients they need from their diet, nutrition experts say. It’s also possible to get too much of a good thing, says Alice Lichtenstein, professor of nutrition science and policy at Tufts University and director of the cardiovascular nutrition lab. “If we exceed the recommended daily allowance [of vitamins and nutrients], there is no indication that will increase our capacity,” she says. “I haven’t seen any compelling evidence to indicate a benefit to willy-nilly drinking of supplement water.”

Courts have taken notice, making it clear that enhanced waters can’t promise the world when it comes to health claims. In 2015, a judge ruled in a New York and California case against Coca-Cola, which makes Vitaminwater, and determined that the company could no longer claim that their waters could “support optimal metabolic function with antioxidants that may reduce the risk of chronic diseases” or “contribute to an active lifestyle by promoting healthy, pain-free functioning of joints,” or that they promote “optimal functioning of the immune system.”

That’s why the current labels claim that Vitaminwater enhances the “focus” and “energy” of people who drink it — allowable language, since the Food and Drug Administration (FDA) only regulates products that make claims related to structure and function of the body, but not to disease. “The label advertising uses vague language so you think you are getting a benefit, but it’s so vague that companies don’t need evidence [to support] that language,” says Liebman.

In an emailed response to TIME’s questions about the scientific basis for claims made on Vitaminwater’s labels, a Coca-Cola spokesperson wrote, “Each of the different Vitaminwater and Vitaminwater zero varieties has a unique combination of nutrients, and all varieties are an excellent source of C and B Vitamins.”

MORE: Foods You Should Eat Instead of Taking Vitamins

Another popular feature of boosted waters, like Lifewtr, made by PepsiCo, is having a higher pH. A higher pH means something is more alkaline, while a lower pH means it’s acidic. pH balance is important for the body, and some companies have suggested that diet can affect this balance, and that their products can bring it back into equilibrium. In reality, however, the body does a good job of maintaining pH regardless of what people eat or drink, so there is no specific dietary recommendation for people to watch the pH balance of their diet.

Some studies suggest that eating a more alkaline diet may be healthier by preventing calcium from being released from the bones and by easing potentially irritating effects of too much acid in the stomach and digestive system. But doctors say there is no evidence that eating a low-acid diet can make you healthier. “In the body, there are mechanisms for regulating pH because it is so critical,” says Lichtenstein. “It’s highly unlikely that you would consume enough of any food or beverage to alter the pH of the body.” Plus, notes Robin Foroutan, a dietitian and spokesperson for the Academy of Nutrition and Dietetics, “even some things that have an acidic pH outside of the body, such as tomatoes or lemons, are actually alkaline-forming once in the body.”

MORE: Bottled Water Is About to Become More Popular Than Soda

Even if you don’t expect that much from your water, drinking water infused with vitamins and minerals instead of plain still might be a bad idea. Many enhanced waters have added sugar — often as much as a similar amount of sugar-sweetened soda.

And while there’s probably no harm in drinking vitamins in your water, you’ll get a far more diverse array from what you eat. Eating vitamin-rich whole foods will also ensure you get enough fiber and other healthy ingredients.

But if you’re drinking it to make up for a less-than-healthy diet and provide you with the nutrients you need — or if you’re regularly choosing it over plain water — then it’s time to turn back to the tap. 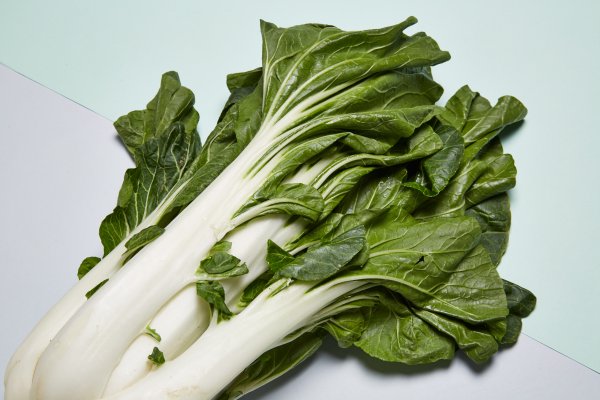 Here’s What to Eat for Lunch If You’re Trying to Slim Down, According to a Nutritionist
Next Up: Editor's Pick