The 75th Golden Globes ceremony was chock-full of meme-able moments, but the award for most relatable reaction of the night clearly belongs to Hugh Jackman. After James Franco took the stage Sunday night to accept the award for Best Actor in a Musical or Comedy for his role playing Tommy Wiseau in The Disaster Artist, the camera panned to a confused-looking Jackman sitting in the audience.

The Greatest Showman star — who was nominated in the same category — appeared to be quite perplexed by Franco’s acceptance speech, which included an awkward moment when Franco pushed Wiseau away to prevent him from taking the microphone. Of course, moments after Jackman’s face appeared on screen, the Internet was off and running with hilarious punchlines for the screencap.

Some joked about how much they identified with the reaction. “I’m Hugh Jackman watching James Franco win best actor,” Twitter user @katieenallen captioned the shot.

While others were outraged at Jackman being snubbed by the Hollywood Foreign Press Association.

“HUGH JACKMAN WORKED ON THAT MOVIE FOR 7 YEARS,” user @bwaykendall wrote in all caps. “IT WAS HIS PASSION PROJECT. HE PUT EVERY OUNCE OF HIS HEART AND SOUL INTO THAT MOVIE AND HE DESERVED A GOLDEN GLOBE.” 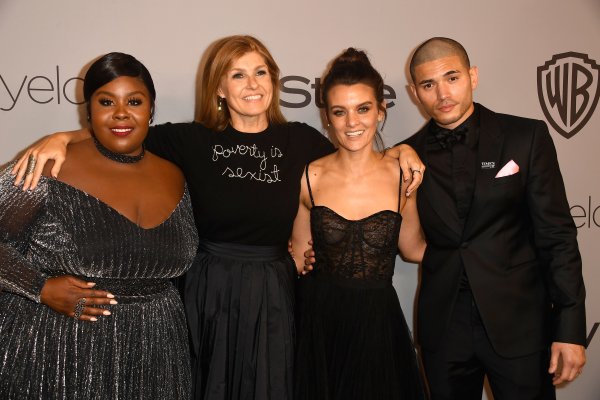 Connie Britton's Golden Globes Outfit Has a Powerful Message
Next Up: Editor's Pick