Get Out, The Post and Dunkirk Snubbed at the Golden Globes

Critically acclaimed films including Get Out, The Post and Dunkirk failed to win any Golden Globe awards Sunday night, despite high praise for the pictures leading into the year’s first major award show.

Greta Gerwig’s Lady Bird nabbed the top nod in the Best Motion Picture – Comedy or Musical category, beating out Get Out which did well with audiences and critics, who called the movie “extraordinary” and “inventive.” The unconventional, racially-themed horror film follows an interracial couple during the meet-the-parents stage of dating and earned a 99% on Rotten Tomatoes. The film’s star, Daniel Kaluuya, also lost the Best Actor award to James Franco, for his performance in The Disaster Artist.

Some fans on the internet thought Get Out movie deserved more recognition.

Other films that were shut out at the Globes included All the Money in the World, Battle of the Sexes, Call Me By Your Name, Molly’s Game and Mudbound.

The TV show Feud: Bette and Joan was the biggest loser on the small screen, failing to win any awards, despite four nominations. 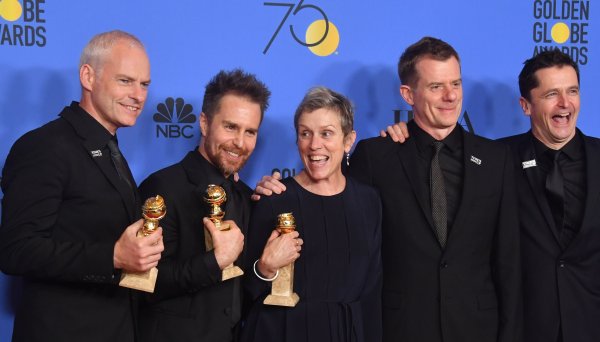 Three Billboards Swept the Golden Globes. Not Everyone Is Happy About That
Next Up: Editor's Pick