By Sean Gregory and Melissa Locker

Curling is one of the oldest team sports on the planet, but only recently has it gotten the attention its fans believe it deserves. This year, five-time Olympic curler John Shuster served as one of the flag bearers for Team USA when the athletes entered the arena at the 2022 Winter Olympics Opening Ceremony—the first curler to do so.

While curling fans love the intricate dance of stones and brooms, every four years the Olympics brings casual viewers who try to understand the sport. After all, it’s a game that involves sliding a hunk of granite down a frozen stretch of water towards a bullseye while someone armed with a broom frantically sweeps the ice. The matches can last hours and seem to involve a great deal of yelling and mix elements of shuffleboard, chess and hockey. It’s confusing, but downright mesmerizing, too. Just ask Mr. T!

Curling action got underway at the Olympics on Feb. 2, with the mixed doubles round-robin stage. The U.S. team fell 6-5 in their competition with Switzerland, knocking them out of medal contention. Now four teams are progressing to the semi-finals which take place on Monday, Feb. 7 and the final and bronze-medal game in the event will be held on Tuesday, Feb. 8th.

So to prepare for the competition to come, here’s your primer on curling’s rules, positions, scoring and equipment—and a little taste of just how excited new and returning fans are getting about the sport that’s most like sweeping rocks.

Who are the American curling competitors at the 2022 Olympics?

For the fourth consecutive Olympics, John Shuster, 39, is once again serving as skip for the U.S. men’s team. He’s the first American men’s curler to make five Olympic squads. Shuster, a Chisholm, Minn., native, was lead for the 2006 Olympic team that won bronze in Torino. While the Americans finished last in Vancouver and ninth in Sochi, Shuster helped Team USA win a historic gold medal in 2018, becoming the first Americans to ever take the top prize in the sport.

Joining Shuster on the team are John Landsteiner and Matt Hamilton, who competed with Shuster in PyeongChang. Colin Hufman is the alternate and Chris Plys is playing for both the men’s team and taking part in the mixed doubles competition.

On the women’s team, once again, Hamilton’s sister, Becca, will represent the U.S. She will be joined by Nina Roth, Tara Peterson, and her sister, Tabitha Peterson, who serves as the team’s skip. The team has Olympic experience and is fresh off a bronze medal win at the most recent world championships.

Plys and Vicky Persinger represented the U.S. in mixed doubles.

Vicky Persinger of Team USA competes during the curling mixed doubles round robin event of the Beijing 2022 Winter Olympics between Britain and the U.S. at National Aquatics Centre in Beijing, capital of China, Feb. 7, 2022.
Liu Xu—Xinhua via Getty Images

What is the history of curling?

The origin of curling traces back to 16th century Scotland, where the sport was played on frozen ponds and lochs. The first recorded match took place around 1541: a Scottish notary recorded a challenge between a monk at Paisley Abbey and a relative of the abbott. Scottish immigrants spread the sport to North America: the first Canadian curling club opened in Montreal in 1807, and the first American club appeared in Pontiac, Mich. in 1828. The Royal Caledonian Curling Club in Scotland, the so-called “mother club” of curling, wrote the first official curling rules in 1838.

Curling first appeared as a medal sport at the 1924 Olympics in Chamonix, France. Only the men held a tournament, and Great Britain won gold (the entire team was Scottish). Curling made five appearances as an Olympic demonstration sport—in Lake Placid in 1932, Garmisch-Partenkirchen in 1936, Innsbruck in 1964, Calgary in 1988 and Albertville in 1992—before the sport was added to the Olympic program in Nagano in 1998. Since 1998, Canada has won three Olympic golds in curling on the men’s side—including the last three—while Switzerland and Norway each won one. Both Canada and Sweden have earned two women’s gold medals in curling; Great Britain won the women’s gold in 2002.

Olympic curling stones weigh between 38 and 44 pounds; the granite is harvested from Ailsa Craig, an island off the west coast of Scotland that resembles, from a distance, a curling stone.

How do you play curling and what are the rules?

A key driver of curling’s appeal is its relative simplicity. Though the sport may have unfamiliar terms and thus seem complicated, it’s actually pretty easy to follow.

A curling match consists of 10 ends, which are equivalent to innings in baseball. In each end, the four players on both teams alternate throwing stones. The lead throws first, followed by the second, then the third—or vice-skip—then finally, the skip. Each of the four players on the competing teams throws two stones per end, for a total of 16 stones. The “skip” is the most important player on the team. The skip not only throws the last stone in an end—which often determines the scoring—but also directs the overall strategy.

To execute a shot, a curler pushes a foot off the hack, a piece of rubber akin to a starting block. The curler slides across the ice, or sheet, to the hog line, and must release the stone before it touches the line. The stone then heads for the house—the area with four concentric circles on the other side of the sheet that loosely resembles a dartboard. The house is the scoring area.

How does curling scoring work?

The team that fails to score in an end gets the hammer, or the advantage of throwing the last stone, in the next end. If no stones remain in the house after an end, no points are awarded: the team with the hammer in a scoreless, or blank, end retains the hammer in the subsequent end. The team with the most points after 10 ends wins the match.

What’s with the curling brooms?

After a curler throws a stone, his or her teammates will often start sweeping the ice in front the stone as it glides down the ice. Why is sweeping the activity that requires the most exertion in this particular Olympic sport? Physics! The sweeping warms the ice and reduces friction, allowing the stone to travel farther and straighter. Depending on the path of the stone and its intended target, a team’s skip will instruct the other curlers to either start sweeping like a teen whose parents are returning home early to an illicit house party, or to lift their brooms.

The mixed doubles tournament is making its second Olympics appearance, after debuting at the PyeongChang Games to complement the men’s and women’s competitions. Mixed doubles curling teams consist of just two players—a woman and a man—instead of the usual four players per team. The game is shorter, too. There are five stones per end and matches are eight ends long, not 10.

To play, the two players take turns throwing five stones per end instead of eight: one player throws the first and last stones, while the other throws the second, third, and fourth rocks. What player fills each roll can change throughout the game as the players determine. In mixed doubles, each end starts with both teams placing one rock in play, either in the house or as a guard. (If you’re not sure what that means, scroll up!) Each team also has one power-play per game, which gives them more choices when it comes to placing their first stone. (If you’re not sure what that means, scroll down!)

Once per game—but not in tie-breaking “extra ends”—the mixed doubles team with the hammer can decide to exercise a “power play.” In the power play, the pre-positioned stones are shifted to the side.

In a perfect world, would curling power plays involve broomstick fighting and a penalty box like they do in hockey, rather than moving rocks around? Probably. But a more genteel game will do just fine. Mixed doubles scoring is the same as the traditional curling game. The team with the most stones closest to the button earns the points in that end.

How are people reacting to curling so far this year?

Curling doesn’t get a lot of air time or publicity outside of the Olympics. So for those who aren’t already part of the curling community and fanbase, it can be quite a journey from discovery to obsession every four years when the sport finally gets its moment in the sun. This year is no exception. From those who find the sedate pace soothing to those who are befuddled by the rules, here’s how viewers are reacting this year to their reintroduction to curling.

Even ducks are getting into it! 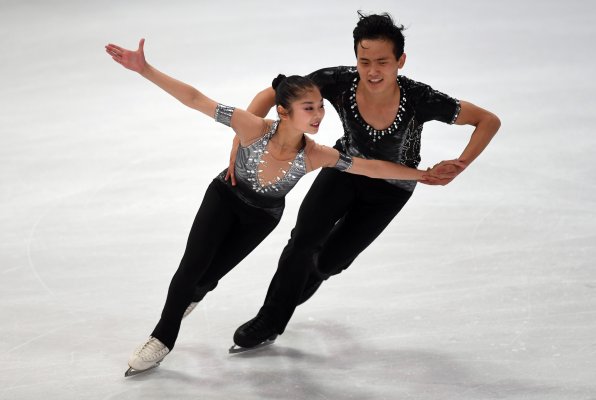 Meet the Figure Skaters From North Korea Who Could Compete at the Olympics in Pyeongchang
Next Up: Editor's Pick