'Not Right!' Barbra Streisand Is Disappointed She's the Only Woman to Win a Golden Globe for Best Director

Barbra Streisand isn’t afraid to mince words about the “terrible fact” that she’s the only woman to have ever won best director at the Golden Globe Awards.

The 1984 Golden Globe Award-winning director wrote on social media after the awards ceremony, “Here’s a terrible fact. There has not been a single woman who has won the Golden Globe for Best Director since I was fortunate enough to win it for Yentl in 1984.”

The 75-year-old also went on to share some female directors who she would have liked to see receive nominations for the award.

“In my humble opinion, I was very disappointed that director Dee Rees and her powerful film @mudboundmovie wasn’t even nominated,” she wrote.

“I also would have liked to see director @PattyJenks and her film @WonderWomanFilm recognized because it shows how strong women can be, not only as characters but also at the box office. The three highest-grossing films last year were all carried by women,” Streisand added.

While presenting the award of best picture, drama, the legendary singer spoke out about how Hollywood needed to recognize more female directors for their work.

“Backstage I heard they said I was the only woman … to get the best director award, and you know, that was 1984: That was 34 years ago. Folks, time’s up!” she said, referencing the movement to help fight sexual harassment and assault in Hollywood and beyond.

Streisand continued, “We need more women directors and more women to be nominated for best director. There are so many films out there that are so good directed by women.”

Natalie Portman also called out the lack of female best director nominees while presenting the award on Sunday night.

“And here are all the male nominees,” she said before introducing the five men up for the award. Guillermo Del Toro ultimately took home the honor for The Shape of Water.

Following the announcement of the 2018 Golden Globe nominations in December, social media was quick to point out the lack of female representation in the category. Celebrated female directors Greta Gerwig, Patty Jenkins and Rees were all left out.

Gerwig’s film Lady Bird won best movie, comedy or musical, on Sunday, while Jenkins broke records with her summer blockbuster hit Wonder Woman. Rees has been largely celebrated for her work on Mudbound, which nabbed a nomination for Mary J. Blige’s supporting performance. And while all three made impressions in the past year, the Hollywood Foreign Press Association left them out of the nominees list.

At the time, most people on Twitter called the snubs a “disappointment.”

The 75th annual Golden Globes were presented live on NBC from the Beverly Hilton in Beverly Hills, California, on Sunday. 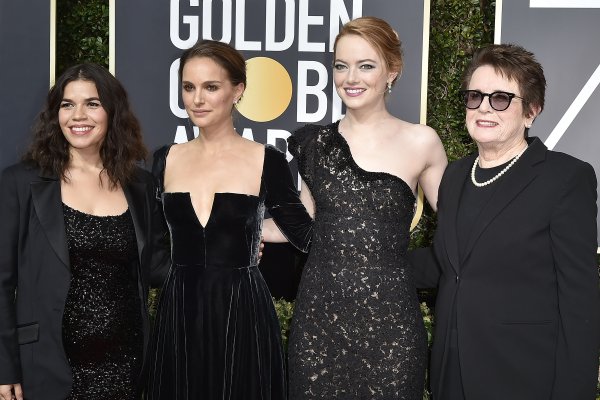 The Internet Loved Natalie Portman's Mic Drop at the Globes
Next Up: Editor's Pick