Winfrey was at the Golden Globes to receive Cecil B. Demille Award at the event and Witherspoon introduced her A Wrinkle in Time castmate. In her introductory speech, Witherspoon noted that on the set, she and Oprah “spent four hours in the makeup chair almost every day.” Witherspoon must have picked up a few things during their time together, because she does an excellent impression of the former talk show host, which she showed off for the press backstage. “You get a Golden Globe! And you get a Golden Globe!” Witherspoon shouted, pointing out the imaginary lucky winners. It was a pitch-perfect imitation of Oprah’s trademark enthusiastic generosity that was traditionally showcased on her talk show’s annual Oprah’s Favorite Things episode and has since become a meme.

While many of the stars’ backstage antics are never seen by the public, luckily, Variety was there to capture Witherspoon’s Oprah impression and share it with us all. 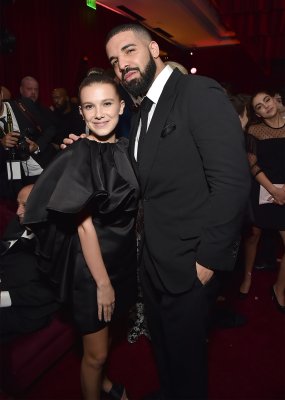 Eleven Was 'Blessed' to Hang Out With Drake at a Golden Globes Afterparty
Next Up: Editor's Pick