Craig David is making a video for my housemates. “Right, I’m here with this amazing one, but Mona, Kat, Kitty, Steph, listen,” he says, holding my iPhone at arm’s length in selfie mode. “I just wanted to send you all of my love and have the best 2018 and if you come to Ibiza at any point this summer you’re more than welcome at one of my pool parties—just turn up and I’ll sort you out to get in and everything.” All I’d done was mention in passing that they were fans during a January meeting with David in his long-time manager’s North London office, and David was quick to spring into action. It’s not just lip service: On my way out, he tells his publicist to “hook me up” and asks how to find me on Twitter.

You could hardly blame David, a British dance music pioneer, if he were a reserved, cautious interviewee, hesitant to speak to press. After all, he has a history of his words being taken out of context, of being incessantly mocked by the media and becoming the butt of his own joke. But as it turns out, David is a genuine Nice Guy—the polar opposite of many of his fellow music industry players. When Kanye West performed on Glastonbury Festival’s Pyramid Stage in 2015, he told the crowd, in typically modest Kanye fashion, that they were watching “the greatest living rock star on the planet.” When David took to the same stage two years later he repeatedly thanked his fans for accompanying him on his rise and fall, his journey from fame to failure and fame again.

And it really has been a ride. After featuring on Artful Dodger’s 1999 U.K. garage club classic ‘Re-Rewind (The Crowd Say Bo Selecta)’, then-17-year-old David became Britain’s hottest new artist. His debut studio album, Born to Do It, sold more than eight million copies worldwide and his multi-platinum-selling first single, ‘Fill Me In,’ debuted at number one on the charts. He received awards for Best R&B Act and Best U.K. and Ireland Act at the 2001 MTV Europe Music Awards, as well as three prestigious MOBO (Music of Black Origin) awards. Everything pointed to a successful career ahead.

Then David’s fortunes took a turn for the worse. A British TV comedy sketch show called Bo’ Selecta!, in reference to David’s first hit, reincarnated him as a caricature. The cult show attacked David’s nice-guy attitude, his unfashionably earnest nature. “To be spoken of in the same sentence as Stevie Wonder is a proper privilege for Craaaaig David,” comedian Leigh Francis warbled in a bad Yorkshire accent, donning a grotesque latex head vaguely resembling the mixed-race singer. Soon after Bo’ Selecta! David’s reputation turned from trendy to tragic seemingly overnight. His next release, an uninspiring album of Motown covers, dismissed by reviewers as a “karaoke record,” bombed. “That covers record wasn’t some kind of cool, sampled vibe—it wasn’t ‘Fill Me In’,” he says. “I’d gone from making one of the biggest garage tunes ever… to this. It was so far from where I wanted to be going. I realized that I wasn’t grounded—I was losing touch. And at that point Miami seemed like a good move.”

A downcast David moved to Florida where he focused his attention away from music and onto weightlifting and the party scene. But the novelty of life in the Golden State and “being cramped up in VIP areas of clubs, spilling drinks on myself” soon wore off and he returned to the studio. He began developing a new musical project, which he dubbed TS5, in which he would DJ, sing, MC and occasionally use a live band. The act took off, and it wasn’t long before he was booked to play TS5 sets around the world, including an annual residency at the Ibiza Rocks pool party—the same one he invited my housemates to this summer.

After TS5 tours came catchy viral videos, including covers of Justin Bieber’s ‘Love Yourself’ and Skrillex and Diplo’s ‘Where Are Ü Now’, as well as a Noisey article called Rise Craig David, Your Time is Now, which convinced David that the time was now for his comeback. Now, with a new record out Jan. 27—called, fittingly, The Times is Now—and high-profile collaborations with Bastille, GoldLink and Chase & Status, as well as a U.S. tour currently in progress, it really has been an unusual comeback. It’s rare for an artist to experience a career renaissance this healthy, but David’s managed to pull it off.

So why did he go away in the first place? David’s sincerity wasn’t always so cool, especially in early noughties Britain, which iconized divas like America’s Mariah Carey, ‘nasty’ showbiz stars like Simon Cowell and the foulmouthed, rough-edged Gallagher brothers, who didn’t hold back from insulting both their fans and each other.

Even the lyrics of his earlier chart-toppers are a testament to David’s character; in his 2001 hit ‘7 Days,’ he describes himself as “not a man to play around, ’cos a one night stand isn’t really fair.” All this made David a perfect target for Leigh Francis’ jokes. The comedian portrayed him as simpleton who took himself extremely seriously, really cared what people thought of him (the definition of uncool) and was beside himself at having the money to buy “a big house with crazy paving outside,” a porch and even “a f—ing sodastream.” But nearly two decades later, the world is a different place, and Bo’ Selecta!, which was scarcely funny at the time, would never have played well in the climate of 2018, where it now reads as crude and even racist.

All this may explain why David’s time really is now. Early noughties Britain smirked at the man earnestly grafting to bring U.K. garage music into the mainstream. But contemporary austerity-driven Britain—a country in the middle of a messy, expensive and highly divisive exit from the European Union, with a Parliament plagued with allegations of sexual misconduct and enormous income, education and healthcare inequalities—has been crying out for a Nice Guy. Enter Craig David, reborn.

Although David is finally being recognized for his talents after being a punchline for so long, he’s committed to staying grounded. “I’m not getting lost in worrying about putting albums out and focusing on where they chart and whether they’re getting onto the right playlists,” he says. “I’ve [been down that road before] and to go there again would be what you might call foolish.” He’s philosophical when reflecting on the ups and downs of his career, referring to it as “the yin and yang of life.” “Someone who’s on the freefall, or who feels like they’re on the descent in some way should remember that there is something necessary for them to experience in this fall, so don’t fight it,” he says. “Own it and know there’s light at the other end of the tunnel.”

And if David’s time is rightly now, he’s quick to make it clear that now has no end date. “To a lot of people I’m at my destination. I’ve arrived. I’m back,” he says. “But no—I’m still on the journey, and I’m not taking my foot off the gas.” 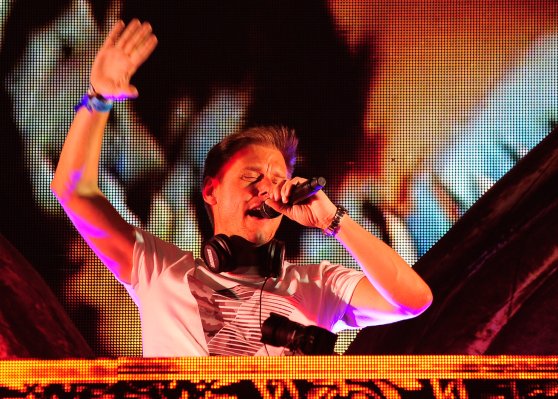 The World’s First Zero-Gravity Nightclub Will Soon be Here
Next Up: Editor's Pick