Here's Why a Marijuana Crackdown Could Spell Disaster for Republicans

The Trump Administration’s moves against legal marijuana could put the issue at the center of the next two elections.

After Attorney General Jeff Sessions announced Thursday that he would reverse an Obama-era executive decision that effectively allowed states to legalize marijuana, the backlash was swift and strong from voters and lawmakers on both sides of the aisle, especially in swing states like Colorado, where the recreational marijuana industry is booming.

“Perhaps the Department of Justice didn’t think this would be a big deal,” Republican Sen. Cory Gardner of Colorado said in a fiery speech on the Senate floor on Thursday. “Thousands of jobs are at risk. Millions of dollars in revenue. And certainly the question of constitutional states’ rights. I believe what happened today was a trampling of Colorado’s rights and its voters.”

Indeed, Colorado will suffer if Sessions’ Department of Justice decides to pursue the federal prosecution of marijuana laws. State taxes on the sale of retail and medical marijuana brought the state nearly $180 million in tax revenue in 2016. Marijuana sales injected more than $1 billion to the Colorado economy in 2017, according to The Cannabist.

“In Colorado it is a billion dollar industry, and it probably produces half a billion dollars in taxes — taxes that are often diverted to schools, to health programs,” Floyd Ciruli, a Denver-based political analyst, tells TIME. “That part of it motivates people who might be less inclined to be supportive: the Chamber of Commerce, older individuals, business-oriented Republicans.”

In a Gallup poll from October, a record 64 percent of respondents backed the legalization of marijuana, including a majority of Republicans for the first time.

But though the rancor over Sessions’ decision has been bipartisan, the consequences will imperil Republicans alone.

“It’s clearly going to attach itself to the Republican Party, particular for those groups that feel strongly about it,” Ciruli says. “2018 is a midterm election year with less voter turnout than a presidential election, so both parties are looking for ballot issues that will drive their base. The Democrats will certainly use it, and it could be extremely detrimental to the Republicans.”

The 2018 midterms are already expected to be contentious. The party of the sitting president historically loses seats in the first midterm election after taking office — a truism likely to be made even truer by the extreme unpopularity of this Republican Congress. Sessions’ move to federally enforce marijuana laws ahead of a tough race amounts to one more risky decision in what could be described as the Trump Administration’s year of living dangerously. Colorado is a swing state, as are North Carolina and Florida — two states almost certainly affected by Trump’s unpopular decision yesterday to open all U.S. coastal waters to offshore drilling.

Already Democrats are seizing on the potential talking points. The party’s lawmakers rushed on Thursday to release statements condemning Sessions’ decision. “This is the opposite of what we should be doing,” Rep. Seth Moulton, a Massachusetts Democrat, said on Twitter. “Let’s not kid ourselves – people will be using marijuana regardless of what Attorney General Sessions says. We have an obligation to regulate it and make it as safe as possible.” 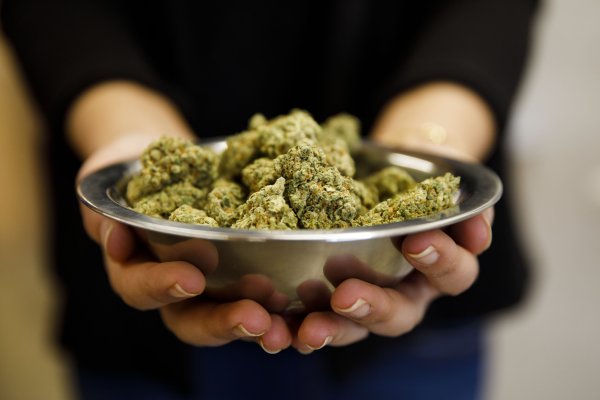 More Americans Want to Legalize Marijuana Than Ever Before
Next Up: Editor's Pick