When the wife of former Republican Senate candidate Roy Moore declared last month, “one of our attorneys is a Jew,” she was swiftly criticized for what many deemed an insensitive effort to combat allegations that she and her husband did not like Jewish people.

But now that Moore has lost his special election in Alabama and his opponent, Democrat Doug Jones, has been sworn in, his wife is ready to explain her comment and reveal the identity of their “Jewish lawyer.”

That lawyer is a man named Martin Wishnatsky, Kayla Moore told AL.com on Thursday — and it turns out Wishnatsky is now a practicing Christian.

“We read where we were against Jews – even calling us Nazis,” Kayla Moore said in an email to AL.com.

“We have a Jewish lawyer working for us in our firm — Martin Wishnatsky. Judge hired him while Chief Justice, then I hired him at the Foundation,” she added, referring to the Foundation for Moral Law, which was founded by Roy and Kayla Moore.

This explanation differs from the person who many publications thought the Moores were referencing as their lawyer. News outlets including the Jewish Forward and the Washington Examiner have said that the candidate’s wife was referring to Richard Jaffe, a Jewish lawyer who represented the couple’s son, Caleb Moore, when he was charged with drug possession several years ago.

Jaffe, who is a longtime friend of Jones, told AL.com earlier this week that he was offended by the Jewish attorney line and said he wasn’t sure he was the correct attorney since he had only worked for the younger Moore.

Wishnatsky, on the other hand, has been a fan of Judge Moore for years, according to AL.com. He met the Alabama judge in 1996 after he had gotten involved in Christianity and conservative activism, particularly around issues like abortion and the Ten Commandments.

While he was raised in a Jewish home in New Jersey, attended Hebrew school and even had a bar mitzvah, Wishnatsky has since changed his beliefs a number of times. His family was not very religious, he told AL.com, and he never felt a very strong connection to God until he “accepted Christ” at age 33.

After that, Wishnatsky experimented with Mormonism and later became an evangelical Protestant Christian. He has been arrested for protesting against abortion clinics and after meeting Moore, he worked at the Alabama Supreme Court and then at the Foundation for Moral Law.

Wishnatsky, now 73, described himself as a “Messianic Jew” and when asked whether he believes a Jewish person who practices Christianity is Jewish or Christian, he replied “You’re both,” according to AL.com. He currently attends Centerpoint Fellowship Church in Prattville, Ala. 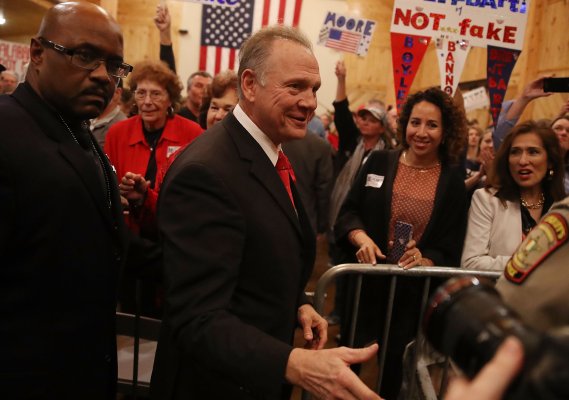 'One of Our Attorneys is a Jew.' Roy Moore's Last Rally Was as Wild as the Entire Campaign
Next Up: Editor's Pick