By Jennifer A. Dlouhy / Bloomberg

The Trump administration is proposing to open almost all U.S. coastal waters to oil drilling, including those off California and Florida where activists have fought for decades to spare delicate ecosystems from oil spills.

The proposal being released Thursday will go far beyond President Donald Trump’s April order directing the Interior Department to consider auctioning oil and gas leases in the Arctic and Atlantic Oceans as well as the Gulf of Mexico.

Instead, the Interior Department is proposing 47 possible auctions of drilling rights in more than 90 percent of the U.S. outer continental shelf, including Pacific waters near California and Atlantic waters near Maine. The draft plan opens the door to selling leases in 25 of the nation’s 26 offshore planning areas.

“Under President Trump, we are going to become the strongest energy superpower this world has ever known,” Interior Secretary Ryan Zinke told reporters.

The draft proposal illustrates the Trump administration’s commitment to expanding domestic energy development beyond the Gulf of Mexico. Both Trump and Zinke have celebrated American “energy dominance,” and the president has vowed to unleash the “vast energy wealth” of the U.S.

The Obama-era plan Trump is aiming to replace forces drillers to focus on the central and western Gulf of Mexico; only one of the existing program’s 11 sales is of territory elsewhere, a 2021 auction of acreage in Alaska’s Cook Inlet.

The new proposal will ignite a clash with environmentalists and coastal residents who have fought offshore drilling that they say poses too great a risk of oil spills befouling beaches, harming marine life and jeopardizing tourism.

“This radical offshore drilling free-for-all is a clear example of politics over people, ignoring widespread local and state opposition,” said Diane Hoskins, a campaign director for the marine conservation group Oceana. “The Trump administration’s plan not only ignores the risky nature of dirty and dangerous drilling, but also the people and coastal businesses who would be most affected.”

All three governors on the U.S. West Coast oppose expanded offshore drilling, and on the East Coast, more than 140 municipalities have lodged their opposition. The governors of North Carolina and Virginia also expressly asked the Trump administration to leave their states out of any new plan, and Florida’s governor announced his opposition Thursday.

“The administration’s backward-looking approach puts oil and gas profits first — and will place our coastal communities and all they support at risk of the next BP-style disaster,” said Natural Resources Defense Council President Rhea Suh, referring to the 2010 oil spill in the Gulf of Mexico. “We’ll stand with leaders of vision, business owners and fishing families on every coast to protect our oceans and shores.”

The Interior Department’s draft is just an initial step in a process of assembling a new five-year schedule for selling offshore oil leases from 2019 to 2024, replacing Obama’s plan that spanned 2017 to 2022. The process for assembling that blueprint begins broadly, with the number of potential sales and the available acreage generally whittled down as regulators move from an initial draft to a proposal and ultimately, the final program.

For instance, the Obama administration originally proposed selling drilling rights in the Atlantic and Arctic Oceans before ultimately abandoning the idea.

The administration could finalize a sale schedule by the end of the year, after multiple rounds of environmental analysis and public comment.

Oil industry advocates argue companies need new options beyond the Gulf of Mexico, where drilling has been ongoing for decades.

“We should keep as many options on the table for our future oil and gas and energy needs,” said Erik Milito, a director with the American Petroleum Institute. “The decisions that are being made now are really decisions about five, 10 and 15 years down the line. We don’t want to prematurely take areas off the table that may be critically important for our energy and national security down the road.”

It is not clear how much oil and gas exists under Atlantic waters off the East Coast, because existing data stems largely from decades-old geological surveys and more than four-dozen wells drilled in the 1970s and 1980s. Some petroleum geologists examining the location of continents before they drifted apart point to discoveries and development in other parts of the Atlantic Ocean as illustrating potential oil deposits along the U.S. East Coast.

Oil is still being produced from wells off southern California’s coast, even though the government last sold leases in the area in 1984. 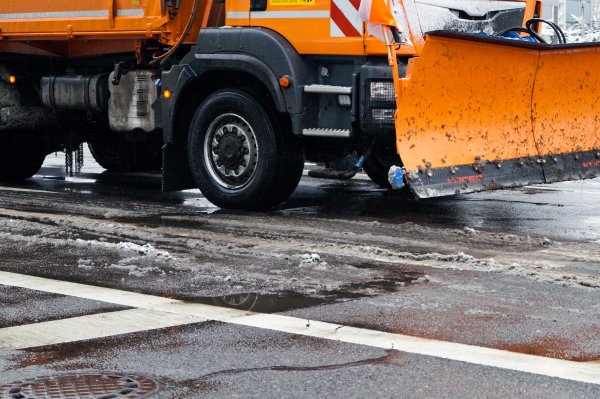 Why We Should Stop Using Road Salt
Next Up: Editor's Pick