New Year's Day is the first day of the legalization of recreational marijuana sales in California.
Maria Alejandra Cardona—LA Times via Getty Images
By Katy Steinmetz

Though setting up a pot shop has always been an uncertain business, memos issued by the Department of Justice under President Obama gave people in the industry some assurance that if they were abiding by state laws, they were at small risk of federal prosecution. But on Thursday, Attorney General Jeff Sessions rescinded those memos, allowing federal prosecutors to enforce federal marijuana laws more aggressively and sending ripples of unease throughout the burgeoning industry.

“A lot of folks in the business and broader society didn’t realize how tenuous the Obama Administration’s safe space was,” says the California Growers Association’s Hezekiah Allen, who represents hundreds of cannabis farmers in a state where recreational pot went on sale for the first time just four days ago. As more states have legalized marijuana and more people have publicly set up marijuana businesses, Allen says, “there is much more exposure to risk than there ever has been.”

Nearly 30 states have legalized medical marijuana. Eight states — which represent about a quarter of America’s population — have legalized recreational marijuana, allowing adults to consume it much like they consume alcohol. But cannabis remains a dangerous drug in the eyes of the federal government. Sessions himself has said the substance is “not the kind of thing that ought to be legalized.” And in announcing the changes, the Justice Department emphasized in a press release that there would be “a return to the rule of law.” Yet the disconnect between federal and state laws on the issue remains unchanged.

Sam Kamin, a marijuana law expert at the University of Denver, says that the changes may essentially give U.S. attorneys around the country “unfettered discretion” to bring cases, but that “it’s not clear how those U.S. attorneys would exercise that discretion.” Michael Vitiello, a criminal law expert at the University of the Pacific, emphasizes that Justice Department resources remain limited and believes that issues like immigration and opioid misuse will remain higher priorities.

California is still getting its recreational market up and running, and Allen says that some cannabis growers are suddenly reconsidering their applications for state licenses — thinking that staying in the gray or black markets might be the safer course after all. Even if vigorous enforcement and raids never materialize, the Justice Department changes are likely going to slow investment in the so-called “green rush” and dissuade some people from setting up new marijuana businesses.

“Investments are less secure,” says Vitiello. “They were insecure anyway, but potential forfeiture of assets and criminal prosecutions all make legitimate business more difficult.” When cannabis producers exit the black market and do all the paperwork required to participate in legal state markets, he adds, “what they’re saying is ‘Here I am.'” And while federal drug enforcement agents might be in limited supply, it takes few resources to send chilling cease-and-desist letters, he says.

Recreational marijuana may be more at risk than medical marijuana. For the last several years, a federal budget provision has prevented the Justice Department from using funds to disrupt medical marijuana markets that have been legalized by states. As Congress inches toward passing a budget for 2018, lawmakers from both sides of the aisle are pushing for that provision to be renewed. And some advocates for marijuana reform believe that rescinding the memos may actually make it easier for their side to win support. “It is a galvanizing moment,” says Grant Smith of the Drug Policy Alliance.

On a conference call Thursday afternoon, several members of the congressional Cannabis Caucus criticized the move by Sessions and argued that the changes only underscore the need for reform at the federal level that will clearly leave this issue up to states and local governments. The lawmakers said that people rely on medical marijuana to treat debilitating conditions, and that tens of thousands of individuals now rely on legal sales of cannabis to make a living. “We’re not going to allow the clock to be turned back,” said California Rep. Barbara Lee, noting that minorities have been disproportionately affected by the enforcement of drug laws.

Also on the call was Colorado Rep. Jared Polis, who has introduced a provision that would also prohibit Justice Department funds from being used to disrupt recreational markets. So far, the measure has found little traction in a Republican-controlled Congress.

Working against broad reform are advocacy groups that oppose legalization, like Smart Approaches to Marijuana. On Thursday, their leader Kevin Sabet applauded Justice Department’s decision, telling the New York Times that “It puts the industry on notice in these states who thought they had cover from the states and the feds.”

The law firm of Vicente Sederberg, which counsels clients who run marijuana businesses in Colorado, was fielding calls on Thursday from people wondering about what might come next. Mason Tvert, who has long advocated for the reform of marijuana laws and handles media relations for the firm, says they have been emphasizing that “it remains to be seen if there will actually be any changes in enforcement.” The changes are causing confusion, he says, “but we don’t expect to see any full-blown rollback of the system.”

Lawmakers from states that have legalized the substance have suggested that a crackdown could prove unpopular, going against the decisions of voters in places from Oregon to Nevada. “With no prior notice to Congress, the Justice Department has trampled on the will of the voters in [Colorado] and other states,” Republican Sen. Cory Gardner said in a tweet condemning Sessions’ move. Support for legalization has been growing in recent years, reaching a record high of 64% in October, according to Gallup. Last year was the first time that a majority of Republicans — 51% — expressed approval.

The potential for profits may also prove to be a buffer, especially under an administration that is resoundingly pro-business. While Sessions has criticized legalization, as has Trump’s chief of staff John Kelly, the President has said previously that the issue should be left to the states. “Remember that the money is not red money or blue money,” Vitiello says of investments in the space. “It is green money.” States have also been seeing windfalls from tax revenue. According to one research firm, Colorado has raked in more than $500 million since starting legal sales in 2014.

If nothing else, Sessions has issued a strong reminder that marijuana remains controversial, even if the first sales of recreational marijuana in California were met with a rather blase attitude on New Year’s Day. Laws such as the Controlled Substances Act, the Attorney General said in his memo, “reflect Congress’ determination that marijuana is a dangerous drug and that marijuana activity is a serious crime.” 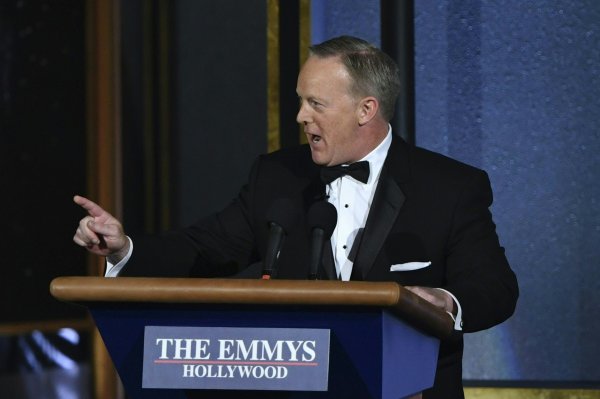 'I Screwed Up': Sean Spicer Says He Regrets Comments on Inauguration Crowd Size and Hitler
Next Up: Editor's Pick