On Sunday night, Oprah Winfrey joined the long list of venerable Hollywood figures awarded the Golden Globes’ Cecil B. DeMille Award. Named for the pioneering director, the award honors outstanding contributions to entertainment. Past recipients include Walt Disney, Lucille Ball, Morgan Freeman and, last year, Meryl Streep. Oprah is the first black woman to receive the award since it was first given out, to DeMille himself, in 1952.

It’s been a busy year for Oprah. She became a correspondent for 60 Minutes, continued her work as a spokesperson for Weight Watchers, continued producing Greenleaf (in which she also acts) and Queen Sugar, and starred in the HBO movie The Immortal Life of Henrietta Lacks — not to mention swatted away rumors about a potential presidential run.

In presenting the award during the 75th Golden Globe Awards, Reese Witherspoon, who stars alongside Oprah in Ava DuVernay’s forthcoming adaptation of the 1962 classic A Wrinkle in Time, reminisced about spending four hours a day with Oprah in the film’s makeup trailer: “It’s like going to Wharton Business School combined with a spiritual retreat.”

In a montage leading up to Oprah’s speech, Witherspoon outlined her remarkable career, including helming 25 years of the highest rated talk show in history and her moving performances in movies like The Color Purple, for which she was nominated for an Oscar and a Golden Globe. When Oprah took the stage, the entire audience remained on its feet until she, in her gently commanding manner, hinted that it was time for her speech to begin.

“In 1964, I was a little girl sitting on the linoleum floor of my mother’s house in Milwaukee watching Anne Bancroft present the Oscar for Best Actor at the 36th Academy Awards,” Oprah began her speech. “She opened the envelope and said five words that literally made history: “The winner is Sidney Poitier.”

Oprah went on to say during her speech that she’d never seen a black man celebrated like in that way. “What a moment like that means to a little girl watching from the cheap seats as my mom came through the door bone tired from cleaning other people’s houses…At this moment there are some little girls watching as I become the first black woman to be given the same award.”

She went on to thank Dennis Swanson, who gave her the opportunity that led to her talk show; Quincy Jones, who suggested her to Steven Spielberg for The Color Purple; best friend Gayle King and longtime partner Stedman Graham.

Oprah then took a moment to acknowledge the Hollywood Foreign Press Association and, more generally, the press, which she said is “under siege these days.”

Finally, she thanked “all of the women who have felt strong enough and empowered enough to speak up and share their personal stories” of harassment and abuse, making special mention of the women whose stories we will never hear: domestic workers, farm workers, workers in factories, restaurants and academia, women in sports and technology and engineering, athletes and soldiers. Women, she said, like her mother, with “children to feed and bills to pay and dreams to pursue.”

She ended her speech by acknowledging Recy Taylor, a young wife and mother who was raped by six white men while walking home from church in Alabama in 1944 and left blindfolded by the side of the road. The spirit of Taylor, who died less than two weeks ago, she said, lives on “with every woman who chooses to say ‘me too’ and every man who chooses to listen.”

“I want all the girls watching here now to know that a new day is on the horizon and when that new day finally dawns, it will be because of a lot of magnificent women, many of whom are right here in this room tonight, and some pretty phenomenal men, fighting hard to make sure that they become the leaders who take us to the time when nobody ever has to say ‘me too’ again.” 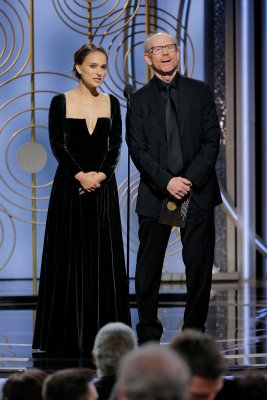 Natalie Portman Calls Out the 'All-Male' Best Director Nominees at the Golden Globes
Next Up: Editor's Pick