This Is What the Future of Food Looks Like, According to Chef Marcus Samuelsson

I was born into improper nutrition in Ethiopia. For my first couple of years, I didn’t get what I needed. We were extremely poor. We didn’t have enough milk, enough food. At 2½ years old, I weighed just 22 lb. It affects you.

After my sister and I moved to Sweden as children, I learned that my teeth were wrong. And no kid wants to grow up being different. I could not eat enough. You always feel like you’re catching up. It took me all the way to age 16 or 17 to do so.

What I felt then and know deeply now–as a chef, an activist and a father of a young son–is that when it comes to food, we are always looking at one another, starting with peeking in each other’s lunch boxes. We are also learning from one another–and that that can make us healthier, our climate more secure and our meals more delicious.

It’s not just the developing world looking to us, either. Just as we look to it for spiritual practices like yoga, we should and do–especially through the Internet–look to it for food. Take places such as Ethiopia, which traditionally has no sugar in its meals. Or Indian food, which is just delicious. There, we can find ways of getting nutrition through vegetables and proteins like chickpeas and lentils, instead of animal proteins that contribute to carbon emissions.

This also can affect the view of developed nations from rising ones–and help stave off the startling rise of obesity. When you think of fast food in America, it’s a money game: you get dinner for four together in a fast, economic way. But elsewhere, places like McDonald’s and KFC are about status. It’s much cooler to go to the chain restaurant with flat screens than to your auntie selling food out of a shack or on the street.

It can be disconcerting to look at what fast food has to done to places like Egypt and Ghana. According to the World Health Organization, worldwide obesity has just about tripled since 1975; today the majority of people in the world live in a nation where obesity kills more people than being underweight does. Meanwhile, world hunger is also on the rise, because of climate change and conflict.

These are not on their face uplifting statistics. But what sustains my optimism is that there has been a very significant shift in the way chefs, institutions and technology companies think and work together. These changes are happening in a way we have never seen before.

There is change happening on a smaller level too. In my company, I don’t buy palm oil anymore because it has such a bad effect on forests. I know other chefs and food providers are taking similar stances. The movement will only grow, and alongside it will be personal best practices that everyone uses themselves every day–to not throw away food, to maybe go vegetarian two days a week. And from there, a whole world of healthy, responsible eaters will blossom, enabling talent–especially young women–across the earth to contribute more to society.

This is coming from someone who was not even supposed to be alive after 18 months. Back then, my life was not counted in months or years but days. I know that we can change, because I have changed.

Samuelsson is a chef, restaurateur and the author of The Red Rooster Cookbook

READ NEXT: What Kids Eat Around the World In One Week 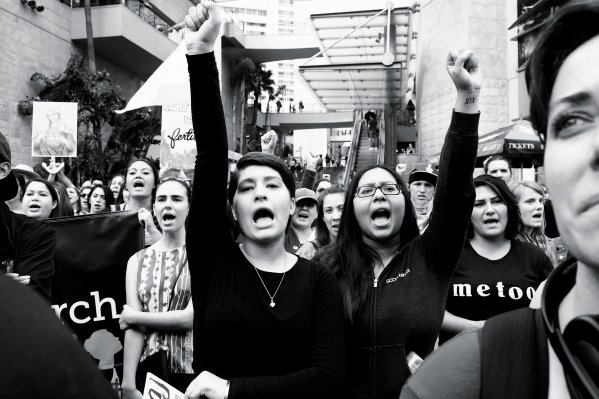 Melinda Gates: It's Time for a New Era for Women
Next Up: Editor's Pick