The White House escalated its public feud with former strategist Steve Bannon Wednesday, saying President Trump was “furious” and “disgusted” with excerpts of an upcoming book.

“Furious, disgusted would probably fit,” spokeswoman Sarah Sanders said of the president’s reaction to Bannon’s comments. She said the statement Trump released earlier Wednesday, in which he said Bannon “lost his mind,” accurately conveys the state of their fractured relationship.

“I think the president and his feelings towards Mr. Bannon are very clear in his statement,” Sanders said. “I don’t think there’s much gray area in what his feelings are.”

In passages from Michael Wolff’s upcoming book “Fire and Fury: Inside the Trump White House,” Bannon made cutting comments about Trump’s cognitive abilities and alleged that Donald Trump Jr. set up a Trump Tower meeting with a Russian attorney, which Bannon now says was “treasonous.”

Sanders said that comment in particular contributed to the dramatic falling out between Trump and his former close adviser.

“I would certainly think that going after the president’s son in an absolutely outrageous and unprecedented way is probably not the best way to curry favor with anybody,” she said, and called the accusation of treason “ridiculous.”

As for the author, Sanders said many assertions in the book are “completely untrue,” and that Wolff had very limited contact with Trump in the White House.

“There was one brief conversation that had nothing to do originally with the book,” she said. “I think it was five to seven minutes total since the president has taken office, and that’s the only interaction that he’s had.” 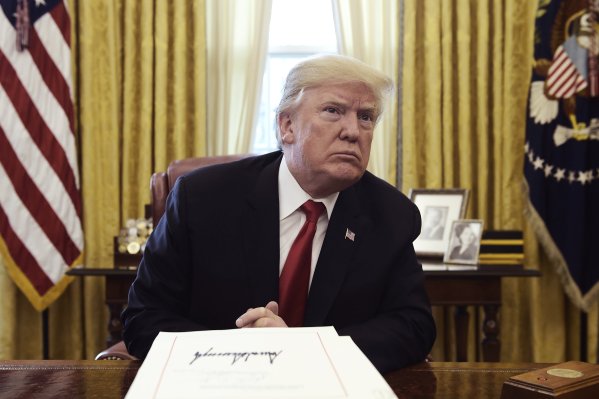 How Trump Would Order a Nuclear Launch
Next Up: Editor's Pick