These Physical Traits Could Indicate a Person Has a Bacterial Infection

The study includes this composite rendering of photographs taken while participants felt sick (a) and healthy (b).
Audrey Henderson, St Andrews University
By Amanda MacMillan

When you feel under the weather, it can be obvious to those around you—especially if you have symptoms like coughing or congestion, or if you’re not acting like your normal self. But even if you try to hide how you really feel, your face may give away subtle clues that you’re unwell, according to a new study. In a series of experiments published in the Proceedings of the Royal Society B, people were able to accurately distinguish between sick and healthy people, at a rate better than chance, simply by looking at their photographs.

To test whether facial cues alone can convey signs of illness, researchers gave 22 adults an injection of either a common bacteria or a salt-water placebo. Although the bacterial injections didn’t make the volunteers truly ill, it did trick their immune systems and trigger an inflammatory response. Soon after the shot, those who received the bacteria began to feel sick.

About two hours after their injections, the people were asked to sit for a photograph with a neutral expression and wearing no makeup. On a separate occasion, everyone returned and received whichever injection they hadn’t had the first time, and were photographed again.

Later, 62 additional volunteers were shown photographs from the first phase of the experiment. Half taken after the bacterial injections, and half taken after the placebo. The volunteers looked at each photo for 5 seconds and were asked to rate whether the person pictured looked sick or healthy.

After almost 3,000 ratings, the volunteers judged the people in the photos as being sick 41% of the time. They received an overall accuracy score of 0.62, on a scale where 0.5 represents complete randomness and 1.0 represents perfect identification.

“These results demonstrate that untrained people can, above chance level, identify acutely sick individuals from merely observing a photo for a few seconds,” the authors wrote in their paper. “This supports the notion that humans have the ability to detect signs of illness in an early phase after exposure to infectious stimuli.”

The researchers also showed the same photographs to a second group of 60 viewers, this time asking them to rate specific characteristics of the people’s skin, eyes and mouths. Pale lips were the most identified feature in subjects who had received the bacterial infections. Pale skin, a swollen face, droopy corners of the mouth, hanging eyelids and red eyes were also more likely in “sick” people versus healthy ones.

“This is consonant with the fact that redness signals a healthy and attractive appearance in both humans and animals,” the authors wrote. Of course, some of these characteristics overlap with being sleep deprived or sad, they add, and not everyone with these traits is truly sick or contagious.

The authors say it makes sense that people in the study weren’t better at detecting sickness from a photograph alone, considering they only looked at the pictures briefly. Judgements in real-life circumstances are likely much more accurate, they hypothesize, because people can process other cues—like gait, body odor and speech, for example—along with facial characteristics.

MORE: Why Men Are Much Worse At Being Sick Than Women

The people photographed for the study were all white, as were most of the volunteers who rated the photographs. The study findings are also limited to a “general sickness state” caused by the body’s immune response, the authors wrote, and may not apply to other diseases or types of illness.

More studies are needed to understand how much humans already use this innate ability to “scan for signs of illness” in their peers, the authors wrote, and how it may overlap with emotions such as anxiety, fear, trustworthiness and attraction to other people. “It is well known that we judge a number of aspects of other people,” said lead author John Axelsson, a professor at Stockholm University’s Stress Research Institute, in an email to TIME. “It has been proposed that potential sickness is a threat that we react to, just like many others, although it is not as a strong as if someone looks very angry.”

Future research may also help people—and possibly computers—get better at recognizing the signs of illness before symptoms appear, says Axelsson. “It may be good to know early, so we can stay home and recover instead of going to work and [spreading] a contagious disease,” he says. 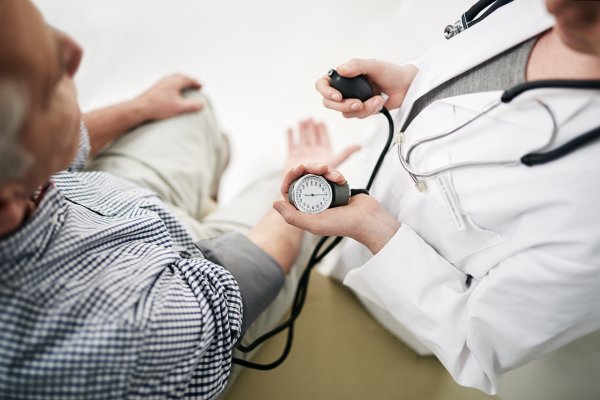 Americans' Life Expectancy Drops for Second Year in a Row
Next Up: Editor's Pick