If the past year is any indication, there’s nothing late night funnyman Stephen Colbert enjoys more than skewering President Donald Trump for his decisions in the Oval Office during his show The Late Show with Stephen Colbert. However, on Tuesday night, Colbert had to settle for calling out Trump via social media as opposed to on camera.

Because Colbert had taped Tuesday night’s episode earlier in the evening, before Trump let loose with a series of tweets from his personal account where he countered North Korean leader Kim Jung Un’s claim that he has a “nuclear button” that could affect the U.S. by tweeting that he has a nuclear button that is “much bigger and more powerful” than Kim Jong Un’s.

Colbert responded with a series of pithy tweets of his own, leaving plenty to his fans’ imaginations.

While he didn’t have as much to say about the “nuclear button” during his show, Colbert addressed Trump’s other tweets about Kim Jung Un, specifically when it came to the tensions between South Korea and North Korea.

“We will see?” Colbert said. “That’s a little nonchalant. ‘Maybe it’ll lead to peace, maybe it’ll lead to thermonuclear war. No way of knowing. I, as the President, would do something about it, but I’m too busy keeping all the planes in the sky.’” 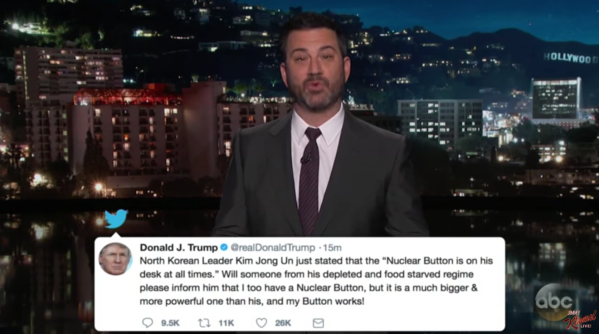