At least one person was killed Tuesday after more than 20 vehicles collided in a pileup on the snowy New York State Thruway in western New York, bringing traffic to a standstill for hours, officials said.

The massive traffic collision on I-90 East occurred about 2:30 p.m. near Buffalo as snow covered roads and reduced visibility, according to Erie County’s Department of Public Works.

Two people were critically injured in the crash that involved 22 vehicles, Erie County Executive Mark Poloncarz said. One of the people hurt later died and the other was taken to a hospital, Poloncarz said.

The deceased was identified by WIVB 4 as 64-year-old Edward Torres. The news station said 11 people were rushed to hospitals.

All eastbound lanes were blocked following the accident, but have since reopened, New York State Police said.

Footage captured by a passenger in the westbound lanes shows dozens of vehicles, including several trucks, backed up. More than 1 million people have watched the video since it was posted Tuesday. 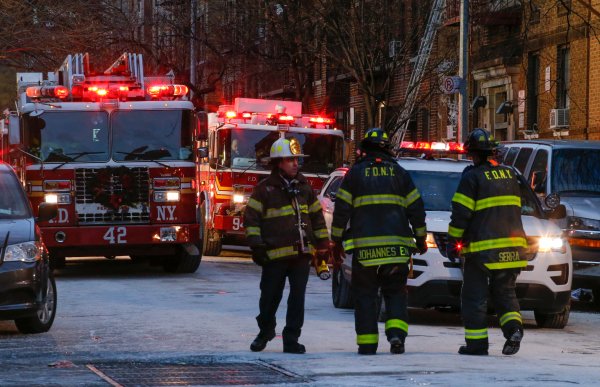 A Decorated Soldier Died While Trying to Rescue His Neighbors from the Bronx Apartment Fire
Next Up: Editor's Pick