'It Really Underlined My Own Sense of Cluelessness.' Meryl Streep Opens Up About Harvey Weinstein

Oscar winning actor Meryl Streep — and former creative collaborator of producer Harvey Weinstein — has condemned the Hollywood executive after numerous women leveled accusations of sexual assault and misconduct against him.

And people specifically wanted to hear what she had to say, which she acknowledged in an interview with the New York Times published Wednesday.

Streep worked with Weinstein on acclaimed movies like The Iron Lady in 2012 and August: Osage County in 2013, both of which earned her Academy Award nominations. Weinstein was fired from his own company in October following reports of multiple decades of allegations of sexual harassment from female actors and employees. Some women alleged that he invited women to his hotel room, asked for massages and, in one case, asked a woman to watch him shower. A lawyer working for Weinstein said in a statement to the Times that Weinstein “denies many of the accusations as patently false.”

Streep was one of the first in her industry to join the chorus of actors speaking out about Weinstein. But when it came to Weinstein’s behavior, Streep has a message to deliver in her statement: She didn’t know.

Separately, following her viral Golden Globes speech about Trump, people also are looking to her to speak out about politics, a role she was quick to dismiss, instead asking to hear from the first family.

What does Meryl Streep want from Ivanka Trump and Melania Trump?

Weinstein isn’t the only man facing allegations of sexual harassment with whom Streep has worked. Streep said that while art can blur lines, during the making of the film Kramer vs. Kramer, Dustin Hoffman crossed the line when he slapped her.

Streep added that she’s optimistic about the future. 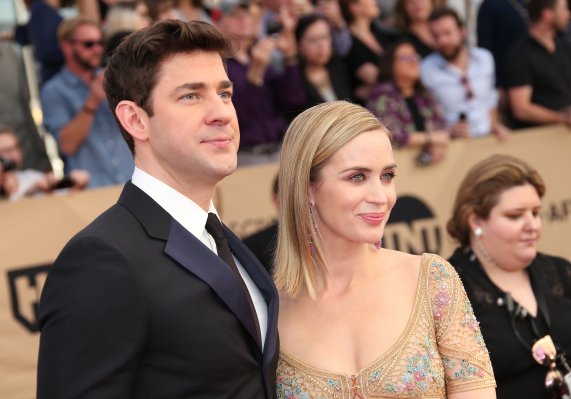 Here's Why John Krasinski Is Emily Blunt's Biggest Fanboy
Next Up: Editor's Pick