'I Too Have a Nuclear Button.' President Trump Hits Back at North Korea's Leader

U.S. President Donald Trump has warned North Korean leader Kim Jong Un in a tweet that the U.S. also has a nuclear button and hinted at his willingness to push it.

Trump lashed out at Kim in a tweet on Jan. 2, ridiculing the North Korean regime as “depleted and food starved” before declaring: “I too have a Nuclear Button, but a much bigger & more powerful one” than that of North Korea. “And my Button works!” Trump wrote.

Trump was responding to Kim Jong Un’s New Year’s address, in which the North Korean leader suggested he was willing to send a delegation to the 2018 Winter Olympics next month in Pyeongchang, South Korea, and signaling a possible opening for dialogue with his southern rivals. But the speech also contained threats reminiscent of his exchanges with Trump last year.

“The U.S. should know that the button for nuclear weapons is on my table,” Kim said, according to an Associated Press translation.

Analysts suggested that the conciliatory rhetoric Kim directed at Seoul may be intended to drive a rift between resident Moon Jae In-led liberal government, which made overtures to North Korea last year, and South Korea’s allies in Washington. 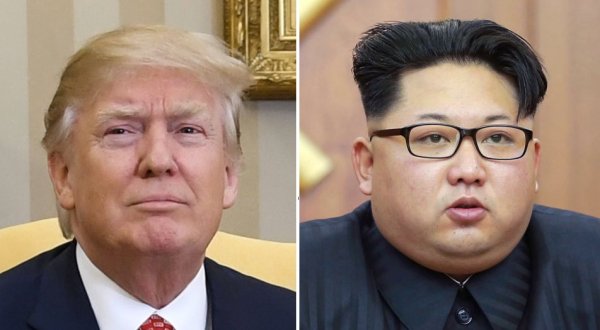 North Korea Lashes Out at U.N. Sanctions
Next Up: Editor's Pick