After missing the 2014 Olympics in Sochi because of a knee injury, Lindsey Vonn—the most successful women’s ski racer in history—is set to return to the Winter Olympics in PyeongChang, South Korea in 2018, where she’ll race in speed events and try to add to her Olympic medal haul.

On this season’s World Cup circuit, which serves as an elite-level tune-up for the Olympics, Vonn has already secured a victory, an emotional win at at Super-G event in Val d’Isere, France. She fought tears because her father, who had never seen her race at the venue, was in the crowd. Over the New Year’s holiday, Vonn returned home to Colorado and put in some training time in Aspen.

With the 2018 Winter Olympics beginning on Feb. 9, here are five things to know about Vonn:

1. Vonn’s Injuries Don’t Keep Her Down

Despite being bitten by injuries throughout her remarkable career, Vonn, 33, has compiled more World Cup wins—78—than any female ski racer in history. At the 2006 Torino Olympics, for example, she crashed during a training run and had to be airlifted off the mountain. The accident, however, didn’t keep her from competing in the downhill, where she finished eighth. Crashes did end her 2013, 2014 and 2016 seasons prematurely.

In November, Vonn broke her right arm in a training crash in Cooper Mountain, Colorado. And in December, Vonn hurt her back during a Super-G race in St. Mortiz, Switzerland. She roiled in pain after crossing the finish, and came in 24th place. But just a week later Vonn was back atop a podium, winning in Val d’Isere.

“I guess I’m not a washed-up old hag,” Vonn said after her victory. “I think I proved myself, and karma definitely comes back around. I’ve got some good karma coming my way.”

2. Vonn Has Taken on Trump

Vonn waded squarely into America’s contentious political climate when she told CNN in December that she would not accept an invitation from President Donald Trump to visit the White House. Traditionally, American Olympians come to Washington for a White House stop after the Games. “I hope to represent the people of the United States,” Vonn said, “not the president.”

While some people praised Vonn, the skiier shared on Instagram that others had hoped she would break her neck for “being anti-Trump.”

3. She Is Already a Record Breaker

Vonn is shooting to break the all-time record for World Cup skiing wins, male or female, which is currently held by Ingemar Stenmark of Sweden; he won 86 races from 1973-1989. While most of Vonn’s victories have come in the speed disciplines of the downhill and Super G, she’s the rare elite skier to have won races in both speed and technical events. She owns four giant slalom wins, two victories in the slalom, and five in the combined, which mixes the downhill and slalom.

Her 39 wins in the downhill, and 28 in the Super G are an all-time mark. She’s tied with Stenmark for most discipline titles, with 16. Vonn has been the best downhill skiier in eight different seasons, while also winning 5 Super G titles and 3 championships in the combined.

At the Olympics, Vonn won a downhill gold medal, and Super G bronze, at the 2010 Games in Vancouver. After missing Sochi, the 2018 Winter Olympics in PyeongChang are likely her last chance to increase her Olympic medal count.

4. Vonn’s Training Workout Is No Joke

To ski speed events, athletes need superior strength to maintain balance and control. Her much-followed exercise routine includes doing situps on a wrecking ball, pull-ups with a chain tied around her waist, and throwing medicine balls to the ceiling.

5. Vonn Has Her Own Line of Gear

In late November, Under Armour launched the Lindsey Vonn Signature Collection, an apparel line under her name. Each piece is named after a milestone of Vonn’s career: the $500 Louise Jacket, for example, is a nod to Lake Louise, Alberta, a place nicknamed Lake Lindsey because of her success there (she’s finished on the Lake Louise podium 25 times).

Vonn’s other sponsors include Red Bull, Oakley, and the Hershey Company. And her 2016 book, Strong Is The New Beautiful, reached the New York Times best seller list for sports titles.

The next chapter of Vonn’s storied career will be written soon in South Korea. 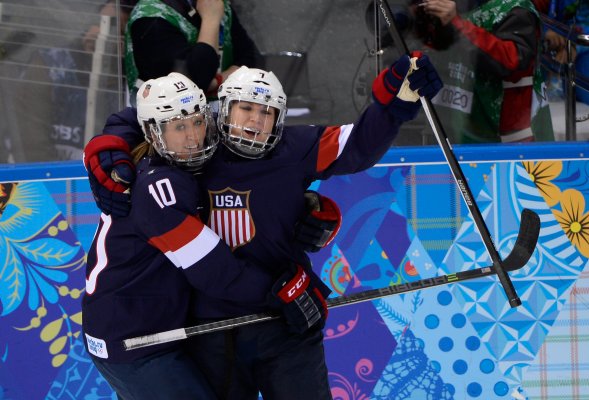 Here Are the Hockey Players Competing for Team USA at the 2018 Winter Olympics
Next Up: Editor's Pick