The dense woodland at the base of Mount Fuji where YouTube star Logan Paul filmed the body of an apparent suicide victim has an international reputation for being a “suicide forest.” But for years, Japanese authorities have been trying to draw less attention to the grim reputation of Aokigahara forest – not more – to discourage the dozens of pilgrims who travel there every year to end their own lives.

Paul, who has more than 15 million subscribers on YouTube, apologized after posting the video, which showed a male suicide victim hanging from a tree and featured Paul and his friends joking about the the body. The clip sparked massive international backlash.

Japan, which has one of the highest suicide rates in the world, has seen declining rates in recent years — in 2016, 21,897 people committed suicide, the lowest level in more than two decades, according to a government report released last year.

The Aokigahara forest, also known as the “Sea of Trees,” remains a popular destination for people who want to commit suicide. It was the setting for the 2015 Gus Van Sant film Sea of Trees, which starred Matthew McConaughey as an American who traveled to the forest with the intention of killing himself, and 2016’s The Forest, starring Natalie Dormer as a young woman looking for her sister who is thought to have committed suicide in Aokigahara.

Japanese authorities no longer release exact numbers of the people who commit suicide in Aokigahara, although it is estimated that officials remove dozens of bodies each year, according to Atlas Obscura. Police records from 2010 show that 247 people attempted suicide in the forest, with 54 people succeeding, according to the Japan Times.

In recent years, local authorities have taken several measures to prevent suicides in Aokigahara. The Japan Times reports that local officials installed security cameras at the forest’s main entrance and increased patrols of the forest in 2011. Signs throughout the forest also warn people against suicide, with messages saying, “Think carefully about your children, your family” and “Your life is a precious gift from your parents.”

The Centers for Disease Control and Prevention says risk factors connected to suicide can include a history of clinical depression, previous suicide attempts, lack of mental health treatment either because of stigma or barriers to access, local epidemics of suicide and feelings of hopelessness. Anyone who needs help can call the National Suicide Prevention Lifeline at 1-800-273-TALK. 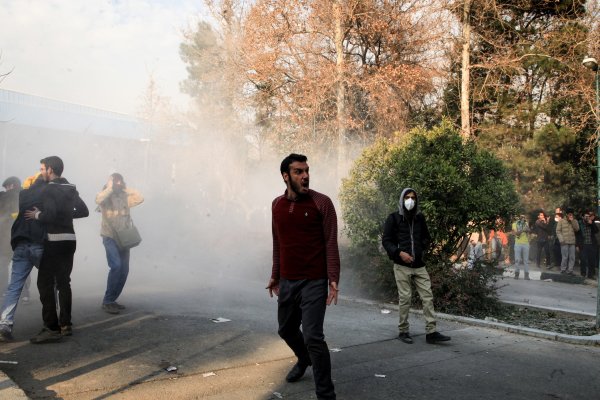 Iran’s Protests Show Split at Heart of Country
Next Up: Editor's Pick