Republicans Will Need Democrats' Help in 2018. Here's Why That's Unlikely

Congressional Republicans rejoiced as they left town in December having passed a sweeping tax reform bill, but they face a series of major problems as they return this month.

Among other things, lawmakers must pass a spending package to keep the government open, reauthorize a children’s health insurance program and decide what to do about undocumented immigrants brought to the U.S. as children.

Most of those priorities will require Republicans to work more closely with Democrats, something that didn’t happen much in 2017, and the Senate GOP will have an even slimmer majority when Democratic Sen.-elect Doug Jones is sworn in Wednesday.

By Jan. 19, lawmakers must pass a spending package simply to keep the government operating — a rote task in different times, but today a protracted display of partisan animosity with no guarantee of success. The Children’s Health Insurance Program, which provides 9 million children across the U.S. with healthcare, is rapidly running out of money and demands reauthorization. And as an Obama-era program to protect 800,000 undocumented immigrants brought to the U.S. as children winds down, Democrats are pushing hard for a replacement.

All of these are problems of Congress’ own making.

The new fiscal year began back in October, but rather than promptly agreeing on a comprehensive year-long spending package, lawmakers have simply kept punting the issue ahead a couple of weeks at a time by passing temporary spending bills known as continuing resolutions. The most recent, passed on Dec. 22, lasts less than a month. CHIP’s authorization expired back in September; without congressional action, 16 states will run out of funding for the program by the end of January. And Congress has long put off figuring out what to do about undocumented immigrants brought as children.

The most urgent fight is preventing a shutdown. Republican and Democratic leaders in Congress will meet with top White House officials on Wednesday to discuss the tasks at hand — namely coming to an agreement on the contentious issue of how government funding should be allocated. Democrats are insisting that all defense spending be matched equally with funding for non-defense programs, such as Medicare, education and transportation. (Currently, the Department of Defense gets about 53% of all federal discretionary funding.) Members of both parties are calling for the budget solution to be long-term: Republican defense hawks argue that temporary funding measures put a financial chokehold on the military.

Unlike the tax reform bill, which Republicans passed with just 51 votes through an arcane Senate process, keeping the government funded will demand bipartisanship, and Democrats seem likely to press their advantage.

“It’s hard to see how [the Republicans] will get the votes for anything beyond a broad deal with Democrats that goes beyond January,” one senior Democratic aide tells TIME. “They need us, and we need to come to an agreement.”

That same aide was slightly more optimistic about bipartisan work on securing a legislative replacement for DACA. “There were good conversations going on in the House and the Senate [before the holidays], and the White House seems interested in working on it,” that person said. One of several parallel efforts is led by Sen. Jeff Flake, the retiring Arizona Republican who says he voted for the tax bill after a promise from Senate Majority Leader Mitch McConnell that the “DACA fix” would be a priority in the new year.

But even there the road to compromise is fraught. Many Republicans have said they will support the bill only if it includes additional funding for border security and greater enforcement of immigration laws within the U.S. Democrats seem tentatively onboard with this, but have drawn the line at Trump’s “border wall” — something he continues to clamor for, even as Democrats insist that allowing it is a non-starter.

Meantime, both Republicans and Democrats will be looking ahead to the November elections. It’s common for the president’s party too suffer losses in the first midterms, and Congress’ approval rating hit an embarrassing 13% low in November, while Trump has only a 40% approval rating, both worrying signs to the GOP.

That could make it harder for Republicans to maintain unity while giving Democrats little incentive to cooperate, two reasons that bipartisanship will be even further out of reach in 2018.

Democrats, meantime, blame Republicans for their own problems.

“[The Republicans] are doing what they always do in terms of the legislative agenda — which is talk about bipartisanship, but our view of bipartisanship is not ‘you guys write a bill and then ask us to slightly tweak it right before a vote,'” one Democratic aide says. According to that aide, Trump has begun talks behind closed doors on a massive infrastructure bill for later this year — talks from which Democrats have been conspicuously absent.

“It’s consistent with how this entire administration is run. For all [Trump’s] talk about being a dealmaker, at the end of the day he’s just a wealthy conservative Republican,” the aide said. 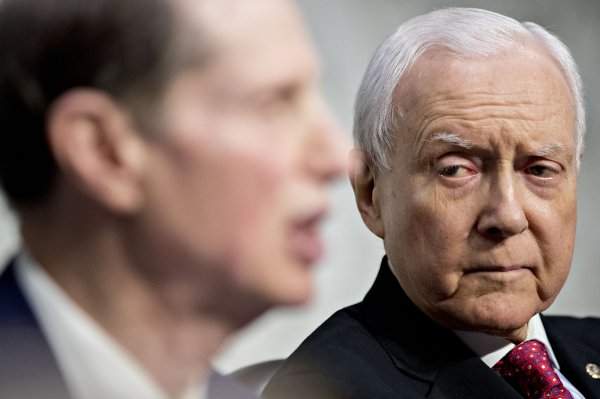 Orrin Hatch Will Retire From Senate
Next Up: Editor's Pick