Iran’s powerful Revolutionary Guard Corps vowed to crush one of the biggest shows of dissent against the government in years, as days of confrontations between demonstrators and security forces turned deadly in a western province. Stocks fell.

The guard — whose mandate is to safeguard the Islamic Revolution — warned late Saturday that it would respond with “a hard punch” if demonstrations didn’t stop. Two protesters were killed in Dorud in the province of Lorestan late Saturday during clashes with security forces, Habibollah Khojastehpour, deputy for political affairs for the province of Lorestan, said in an interview posted on the website of Iran’s state broadcaster.

The protests, which began in the northeastern city of Mashhad on Thursday, present a serious challenge to President Hassan Rouhani and the Supreme Leader, Ayatollah Ali Khamenei. Protesters first took aim at rising food prices and corruption, driven partly by a sense that the July 2015 nuclear deal hasn’t delivered the broad economic recovery many were expecting. By Friday, the dissent spread to other areas, and evolved into a wider condemnation of the clerical establishment and security forces.

Government officials have said the protests are part of a wider attempt by Rouhani’s opponents to discredit his leadership. Iran’s hardline media have said justified criticism of the government has been hijacked by a wider foreign plot to sow sedition in the country.

Protesters “must certainly know that improper behavior will be to their detriment, and the nation will come out and stand against these actions and throw a hard punch in their faces,” the Revolutionary Guard’s commander for security in Tehran, Brigadier General Esmail Kowsari, said according to a statement carried by the semi-official Iranian Students’ News Agency late Saturday.

The Iranian parliament’s national security and foreign policy committee called an extraordinary meeting for this week to assess the events, lawmaker Hossein Naghavi Hosseini told the Iranian Students’ News Agency in an interview. Rouhani’s office denied a report in the semi-official Iran Newspaper that he planned to give a televised speech on Sunday.

Overnight unrest in the capital Tehran was concentrated in a few major intersections, according to the semi-official Tasnim news agency. The report said bus stops had been vandalized and garbage dumpsters set on fire. There has been heavy police and security presence in restive areas, including scores of anti-riot police clad in black uniforms and helmets. The capital was quiet on Sunday.

The protests have erupted at a time of deepening strains between Iran and the administration of U.S. President Donald Trump, who has imposed additional sanctions on Tehran and has threatened to scuttle the nuclear accord. Trump said on Twitter that the “world is watching” events in Iran, and that the government “should respect their people’s rights, including right to express themselves.”

The Foreign Ministry in Tehran dismissed Trump’s comments, saying “the Iranian people place no value or credibility in the opportunistic claims of U.S. officials or of Mr. Trump himself.” 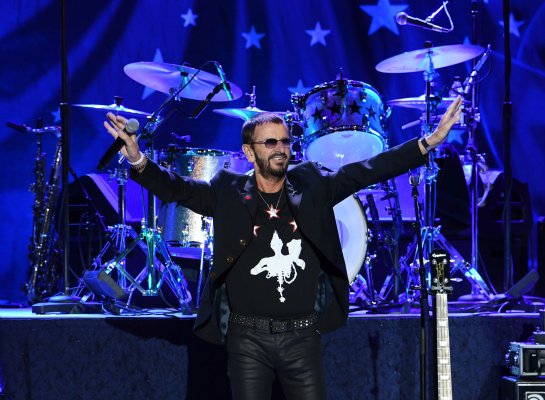 Ringo Starr and Barry Gibb Are Knighted
Next Up: Editor's Pick