'A Disproportionate Hit.' 2017's Weather Disasters Are Among the Worst in U.S. History

In the year that President Donald Trump pulled out of the Paris accord and downplayed global warming as a security threat, the U.S. received a harsh reminder of the perils of the rise in the planet’s temperature: a destructive rash of hurricanes, fires and floods.

The country recorded 15 weather events costing $1 billion or more each through early October, one short of the record 16 in 2011, according to the federal government’s National Centers for Environmental Information in Asheville, North Carolina. And the tally doesn’t include the recent wildfires in southern California.

In many cases, weather broke records. In others, it was just downright odd, like the February warm spell that sent temperatures to a record 72 Fahrenheit (22 Celsius) in Burlington, Vermont, and spawned a tornado in Massachusetts.

“When all is said and done, this year is going to be one of the worst years on record for U.S. damages,” said Antonio Busalacchi, president of the University Corporation for Atmospheric Research in Boulder, Colorado.

Among the most devastating events were hurricanes Harvey, Irma and Maria and wildfires in northern California. The killer storms caused economic losses of more than $210 billion in the U.S. and across the Caribbean, and about $100 billion in insured damages, according to Mark Bove, a senior research scientist with Munich Reinsurance America in Princeton, New Jersey.

The list goes on — ruinous hail in Colorado and Minnesota, tornado outbreaks across the Midwest and South, flooding that damaged a massive dam in California and triggered evacuations downstream. A lake-effect snowband off Lake Erie dumped 34 inches of snow at Pennsylvania’s Erie International Airport on Christmas Day, quadrupling the previous record from 2002, according to the Weather Channel. A warming climate can bring an increase in lake-effect snow, according to NOAA.

Many of the events can be explained by historical weather patterns. The most calamitous, though, showed signs of a warming climate, including Hurricane Harvey, which dropped as much as 60 inches of rain as it meandered around the Texas coast after coming ashore as the first of three Category 4 storms to strike the U.S. this year.

Warming worsened Harvey’s impacts by boosting moisture in the atmosphere and weakening high-altitude winds that would normally push such a system along, according to Kerry Emanuel, a professor of atmospheric science at the Massachusetts Institute of Technology in Cambridge. Harvey marked the third-straight year of major flooding in Houston.

In Texas and elsewhere, “there are certainly indications that these extreme rainfall events are occurring more frequently,” said Greg Carbin, branch chief at the U.S. Weather Prediction Center in College Park, Maryland.

Those who are skeptical that climate change is a phenomenon, or that human activity is to blame, contend that dramatic weather this year was happenstance or part of larger, regular meteorological swings. Trump, who has in the past dismissed the concept of man-made climate change as a hoax, announced in June that the U.S. would leave the Paris climate accord, saying it favors other nations at the expense of American workers.

The overwhelming consensus among scientists is that Earth’s climate is warming and that greenhouse gases are the prime reason. The American Meteorological Society linked changing climate and severe weather this month in a report that included contributions from researchers at the U.S. National Oceanic and Atmospheric Administration.

“When you see an extreme event that is breaking all records, it is more likely to have the fingerprints of human-induced climate change,” said Brenda Ekwurzel, senior climate scientist at the Union of Concerned Scientists.

Earlier this year, rain and snow that brought life to California hills parched by six years of drought foretold dangerous times. The moisture produced a bumper crop of grass and brush that then dried out, leaving ample fuel for wind-driven flames that burned large swaths of Napa and Sonoma counties in October and Santa Barbara and Ventura counties this month.

“Prolonged drought and warming temperatures in California are not just extending the state’s wildfire season, they are increasing the evaporation rate of water,” Bove said. “This means that extreme wildfire conditions will return to California after a rain event more quickly today than in the past.”

At least 40 people died in the fires, some of which were among the top 20 most destructive in state history, according to the California Department of Forestry and Fire Protection. The Thomas fire, now almost contained, set a record as the largest ever in the state.

While other countries suffered intense and unprecedented weather in 2017, the range and number of incidents across America put it in its own league, said Bob Henson, a meteorologist at at Weather Underground in Boulder, Colorado. “The U.S. took a disproportionate hit.” 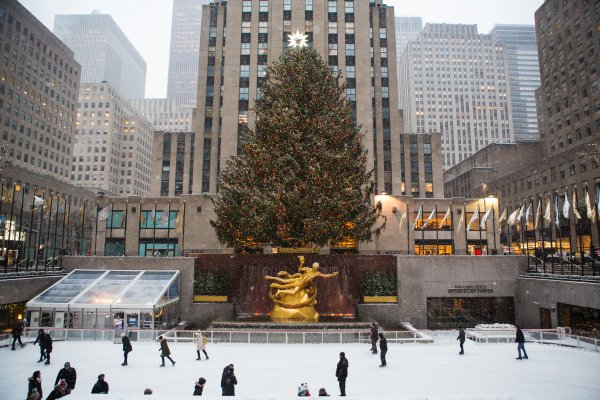 People Across the Country Are Celebrating a White Christmas Today
Next Up: Editor's Pick