Islamic State claimed responsibility for three suicide bomb attacks in Kabul which killed as many as 41 people and wounded 80 others at the Afghan Voice Agency and the Shiite-run Tebyan cultural center.

The latest attack on Afghanistan took place during a panel discussion to mark the 38th anniversary of the Soviet invasion of the country, according to the news agency AVA. The victims include journalists and university students.

The attack comes one-and-a-half months after the terrorist group struck the Shamshad local television channel in Kabul, killing two guards and wounding 20 others. Another suicide attack by the group on a mosque in October in Kabul killed more than 30 worshippers.

Ordering authorities to investigate the incident, President Ashraf Ghani said these “heinous attacks will not break the resolve of the Afghan people,” according to an emailed statement from his press office.

U.S. President Donald Trump, who earlier this year boosted forces in the country amid signs that Ghani’s government was losing ground to the Taliban and Islamic State, has been briefed by Chief of Staff John Kelly and is continuing to monitor the situation, White House spokesman Hogan Gidley said Thursday.

Vice President Mike Pence told U.S. troops during a surprise visit to Afghanistan last week that “victory in closer than ever” in what has become the longest war in U.S. history. As Trump wraps up his first year in office, about 14,000 U.S. military personnel are stationed in Afghanistan, more than 16 years after they first arrived following the Sept. 11, 2001 terror attacks.

Afghanistan remains one of the world’s most dangerous nations for media organizations, according to a Dec. 22 report from Reporters Without Borders. 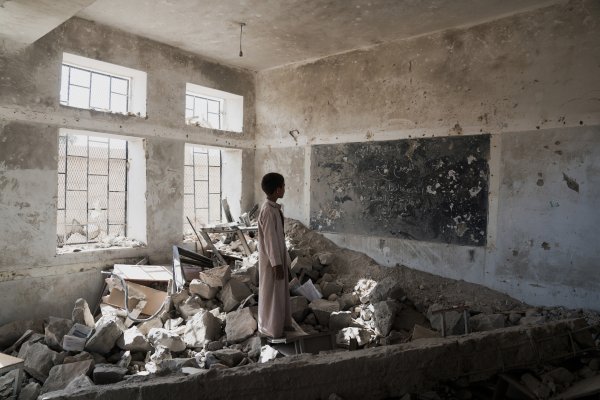 Children Faced 'Shocking' Scale of Violence in 2017
Next Up: Editor's Pick