Prince Harry and Meghan Markle have released two official photographs to mark their engagement, which show them in the grounds of Frogmore House, a royal retreat around a mile from Windsor Palace in the United Kingdom.

The first photograph shows the pair sitting on the steps of Frogmore House, with Meghan’s engagement ring — which features a center stone from Botswana and a diamond which came from the late Princess Diana’s personal jewelry collection — proudly on display.

The second photograph is black and white and shows the pair in a playful embrace. Both pictures were shared by the palace’s official Twitter account Thursday morning.

Buckingham Palace announced Harry’s engagement to the American actress and activist on Nov. 27. The wedding is set to take place at St. George’s Chapel in Windsor Castle on May 19, 2018 — the month after Kate Middleton and Prince William are expecting a third child, a sibling to George and Charlotte.

After their wedding, Harry and Meghan are set to live in Nottingham Cottage at Kensington Palace in London. 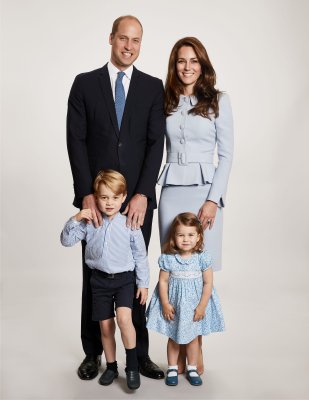