Myanmar has barred an independent U.N. rights investigator and withdrawn any government cooperation for the rest of her tenure, prompting further indictments of the country’s backsliding on human rights. Observers say the move reflects a possible deepening of a bunker mentality as the country is besieged by international criticism over what the U.N. has labeled an ethnic cleansing campaign.

Yanghee Lee, the U.N.’s special rapporteur on the situation of human rights in Myanmar, was due to visit the country in January. She says she learned of the ban after repeated deadlines lapsed regarding her upcoming trip. When she called a government official, she was told there was “some bad news”.

“It’s a really troubling development,” Lee tells TIME. “I would be the last to imagine this would happen, especially under the NLD [National League for Democracy] government which operates on a ticket of democracy, human rights, and respect for rule of law. But we’ve seen a real backsliding.”

Myanmar told Lee the decision to permanently rescind her access stems from what it called a “biased and unfair” statement she made at the end of her last visit in July. At the time, she accused Aung San Suu Kyi’s civilian government of behaving like its military predecessors, such as in its persecution of the Muslim Rohingya minority.

Lee’s assessments of rampant human rights abuses in Myanmar—especially her condemnations of official attitudes toward the Rohingya—have previously triggered backlash and protests. Buddhist monk and notorious nationalist provocateur Wirathu once called her a “whore”.

However, just two weeks ago, Myanmar’s representative to the U.N. reportedly told the Human Rights Council that the country was willing to continue cooperating with the investigator. Officials could not be reached to comment on the change of policy.

Lee says increasing resistance has been apparent, with two ministers declining to meet with her on her last visit. She added that de facto leader Aung San Suu Kyi appeared to be taking personally critical U.N. reports documenting widespread allegations of military-perpetrated rapes and killing of Rohingya.

For human rights observers, Lee’s blacklisting comes as an escalation of Myanmar’s crackdown, but is not necessarily surprising. The government has refused to grant visas to a U.N. fact-finding mission tasked with examining claims of military-led abuses.

“What is clear is that [Aung San Suu Kyi] is not prepared to accept international criticism, regardless of evidence presented about the atrocities committed,” says Phil Robertson, deputy Asia director at Human Rights Watch.

He added that Myanmar is increasingly adopting “a ‘shoot the messenger’ approach to human rights activists, investigative reporters, and UN agencies and NGOs that raise concerns about what the government is doing.”

Except on tightly controlled government-led tours, journalists and foreigners have largely been barred from Rakhine State, where a military campaign has prompted more than 650,000 Rohingya to flee to neighboring Bangladesh. Myanmar says it is responding to a Muslim insurgency; the U.N.’s human rights chief says genocide can’t be ruled out. Two Reuters journalists reporting on the crisis were arrested last week and their location remains unknown, leading to fears of enforced disappearances.

James Gomez of Amnesty International says the timing of Lee’s blacklisting is “troubling” given Médecins Sans Frontières’s recent estimate of at least 6,700 Rohingya killed in just the first month of recent violence, and the military’s announcement that it discovered a mass grave.

“Myanmar is in shameful company in isolating itself from the U.N. in this way,” he says. “The government is unquestionably returning itself to pariah status.” 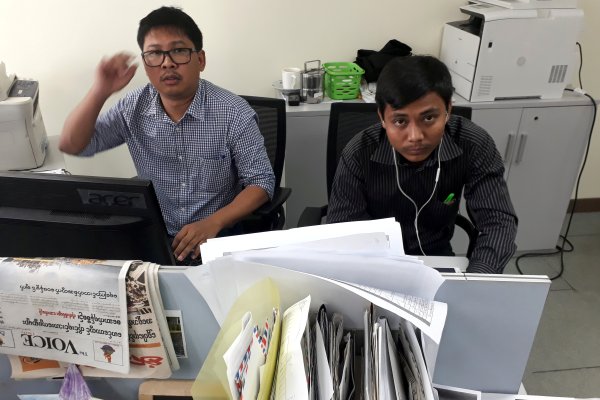