‘We All Need to Acknowledge and Blow Up This Cycle of Abuse.' Jessica Chastain on Hollywood and Molly's Game

In the early 2000s, skier Molly Bloom was an Olympic hopeful. A decade later, she was busted for running an elite underground poker game populated by Hollywood heavyweights, Wall Street billionaires and Russian mobsters. Jessica Chastain plays the real-life “poker princess” in Molly’s Game, out Dec. 25, the directorial debut from screenwriter Aaron Sorkin (The West Wing, The Social Network).

Chastain says the movie, based on Bloom’s memoir of the same name, examines how a woman survived and thrived in a toxic boys’ club culture—a particularly timely topic in the #metoo moment. The actor spoke out at this year’s Cannes Film Festival about the disappointing portrayals of women in Hollywood and argues that Molly’s Game overturns stereotypes about Bloom and women in general. She also says the film marks a departure for Sorkin, who has previously been criticized for his portrayals of women.

The thing that really fascinated me is that she was a creation that society made. Everything about Molly was groomed. We know in our society, women are valued for their sexual desirability and not necessarily for what they have to say. Molly learned early on that if she presented herself in a certain way, rich and powerful men would pay more attention to what she had to say.

At one point in the movie, Molly gets beaten up. Where do you draw the line with violence against women onscreen?

I have a problem with filmmakers who use violence against women, and especially rape, to make a woman stronger—where the woman needs to be victimized in order to become a butterfly. I find that pattern in cinema really disturbing.

I think it’s important to acknowledge that this really happened to Molly. And the way the scene was shot, it was not a phoenix-rising moment. She didn’t come out of it a different person or stronger because of it. As we know from watching the news, there are situations where a woman says no to a man, and the man responds with violence or abuse. That’s what happened to Molly.

Sorkin has been criticized for his portrayal of women. As an outspoken feminist, did you worry about working with him?

I had no trepidations. Aaron is a very successful white male writer. Let’s be honest—for his directorial debut he could have told any story he wanted. But he decided to write about this woman and her fight against the patriarchy. That shows his growth as an artist. I can’t tell you how many incredible directors I long to work with, but then I look at their IMDb page, and they haven’t made a single movie about a woman. So I’m incredibly inspired by Aaron for acknowledging he dropped the ball, saying he is sorry and working to change the industry.

The very first day of filming was the day after the election. I came to work very emotional, and he said, “I’m going to send you an email I sent to my daughter.” Everything he wrote in that email, which has been published, was exactly what I needed to hear. He said, “I didn’t realize, and I’m sorry.”

With everything going on right now with the sexual harassment revelations, do you feel like men in Hollywood are stepping back and asking, “What are we doing wrong?”

Some. But a lot are quiet. That’s what’s so devastating. I know they are probably afraid because they don’t know what to say. And sometimes the problem is so close to your face, you just become blind to it. But now we all need to acknowledge and blow up this cycle of abuse.

What needs to change for women in film?

We have grown up watching women be used as props on a man’s journey. It’s not our fault that that’s what we saw as children. But we need to acknowledge that and do better. 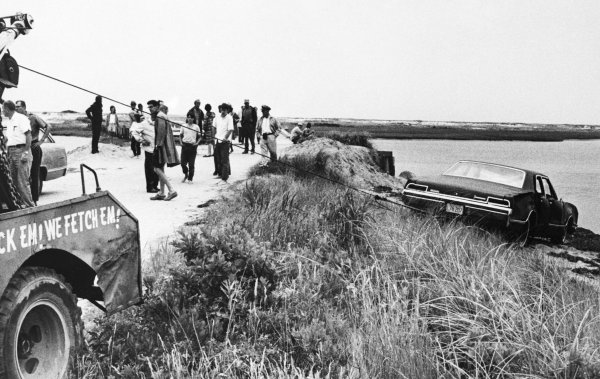 Ted Kennedy's Life Gets Derailed in the Exclusive Trailer for Chappaquiddick
Next Up: Editor's Pick