The True Story Behind the Movie Molly's Game

In the last decade, Aaron Sorkin has written one biographical drama after another: The Social Network, Moneyball, Steve Jobs. But unlike many other screenwriters, Sorkin is usually more interested in the dramatic arc of his subjects’ lives than the fussy details. As far as we know, Mark Zuckerberg wasn’t actually fostering a grudge about a bad breakup when he rose to prominence. But that plot point sure makes for a great final shot.

And yet Sorkin’s latest film and directorial debut Molly’s Game is relatively faithful to the life of its subject, Molly Bloom (played by Jessica Chastain). The so-called “Poker Princess” ran two underground games that attracted high-rolling Hollywood stars, athletes and mobsters in the mid-2000s. It’s not surprising that the movie hews close to reality: Sorkin consulted Bloom throughout his writing process, and the screenplay borrows heavily from her memoir of the same name.

Here’s what’s fact and what’s fiction in the poker film, according to Bloom’s memoir.

She didn’t actually have a dramatic skiing fall.

In the opening scene of Molly’s Game, a young Molly skis over a twig during an Olympic qualifying run and tumbles down the mountain, sustaining a serious back injury that ends her skiing career. In a voiceover, Molly blames this twig for changing her life path from athlete to “poker princess.” But in real life, that fall never happened.

While Bloom was indeed an Olympic-level skiier, she decided to retire from skiing not after an injury but after a personal coup. Bloom did have some physical roadblocks when she was younger, with an emergency back surgery at 12 after which she was told she could no longer ski competitively. But after a year, she was back on the slopes. And in college, she made the U.S. ski team and finished third overall in the country.

But she decided to step away from the sport after winning that bronze medal because, as she says in her book, she wanted to find a new path in life and succeed on her own terms.

Her dad was hard on her.

In her book, Bloom speaks very lovingly of her father (played in the movie by Kevin Costner). But he definitely pushed his children to their limits. “Nothing was ‘recreational’ in our family,” she writes. “Everything was a lesson in pushing past the limits and being the best we could possibly be.”

Since Bloom wrote her book before she was sentenced for her role in the gambling ring, she doesn’t address whether her father really showed up in New York City to give her a pep talk about her trial, as he does in the film. But it’s not hard to imagine Sorkin adding that dramatic flourish.

She did start her career as a waitress and assistant.

Bloom met her future boss, played in the movie by Jeremy Strong, when he almost hit her with his car in Los Angeles. She had just quit a job as a waitress, and he noticed her uniform. The man, whom she calls Reardon Green in the book, hired her on the spot for a job at his restaurant. Eventually, the entrepreneur made Bloom his assistant, as well.

He wasn’t the most pleasant of employers: The line in the movie when he rejects a bag of bagels he’d asked her to buy, yelling, “These are poor people bagels!” is real, according to her memoir. But he did introduce her to the world of poker and the game at the Viper Room, a bar he co-owned. When he fired her from the game, she used her new contacts to start one of her own.

Celebrities, including Ben Affleck and Tobey Maguire, did play in Molly’s game.

Aaron Sorkin doesn’t name the celebrity players who frequented Bloom’s game in the film, but Bloom does identify some of them in her book, including Ben Affleck, Tobey Maguire and Leonardo DiCaprio. However, she only names people who had already been exposed in the media before her book hit shelves, protecting other players from exposure.

Maguire plays the biggest role in Bloom’s memoir, and there appear to be elements of him in “Player X,” played by Michael Cera in the movie. (Sorkin even nods at Maguire, who played Spider-Man, with a line about the unnamed actor playing a superhero.) In the book, Bloom writes that Maguire once offered her $1,000 to bark like a seal and stormed off when she refused. However, Maguire didn’t take the game from her like Player X does in the movie — another player did. But Bloom writes that the actor was the one who gleefully called her informing her that she had lost her weekly game.

A mobster really did point a gun at her head.

The scariest scene in the movie comes straight from the pages of Bloom’s book. The real Bloom began getting nervous about toting around so much money between games and hired a driver for security reasons. It was this driver who introduced her to his mobster “friends.” Bloom did meet them in a fancy hotel lobby, and one of the men really did order an apple martini there.

The men offered Bloom muscle in exchange for a cut of her earnings. She rejected the offer. Weeks later, a stranger showed up at her door with a gun. He slammed her against the wall and stuck the gun in her mouth. He stole her cash and jewelry and made it clear that he was sent by the men she had met at the hotel. He threatened her family if she didn’t accept their protection and then beat her up.

Bloom hid out in her apartment for a week while her bruises healed. The mobsters contacted her about setting up another meeting and she agreed. But before they could meet them, she read in the paper that the FBI had arrested nearly 125 people in a massive mob roundup. She never heard from the men who threatened her again.

Though Bloom did employ real lawyers, Charlie (Idris Elba) is a fictional character who appears to be basically a stand-in for Sorkin himself — someone who is skeptical of Molly at the outset but comes to see her as a heroic figure.

Her lawyer also wouldn’t have had time to formulate opinions about Bloom based on her book. In the movie, Charlie reads the memoir before his first meeting with her. In reality, the book was published after she was arrested but before she was sentenced. 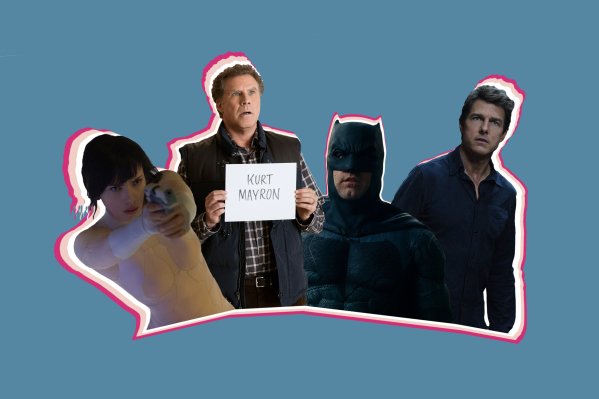